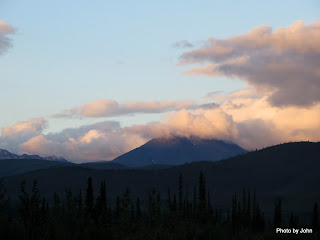 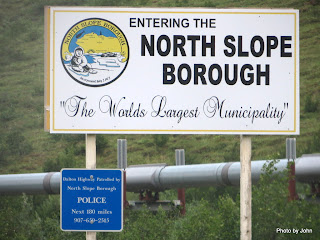 and thirty miles later entered the North Slope Borough, "The World's Largest Municipality." Only 180 miles to go from here to downtown Deadhorse. 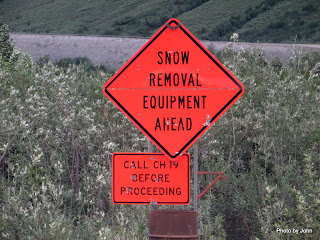 Apparently the road crews don't understand the function of hinges. There were at least three instances of snow removal equipment warnings that were still displayed as reality. While it would be nice to have had a CB radio, I forgot about getting one in advance of the trip. 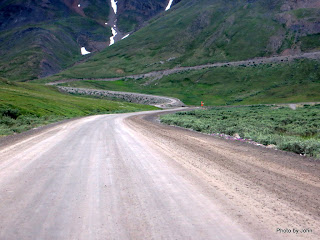 I can see how the climb up Atigun Pass could be a challenge for trucks in the winter, given the slope, the hairpin curve at the bottom of the slope, and the multiple avalanche chutes. 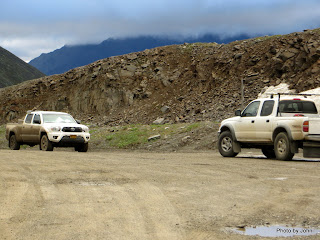 At the top of the pass, the other white pickup suggested my experience to the north might be different than what I'd experienced thus far. 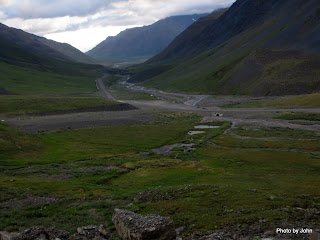 The descent from Atigun Pass opened into a large valley and tundra. The change between the south side and the north side was striking. It was also obvious that while I'd slept through a rainless night about 40 miles south, the north side of the Brooks range had received a good dose of rain. 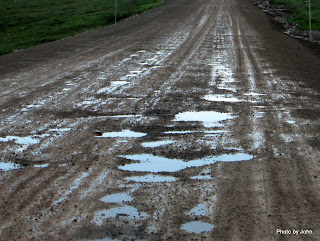 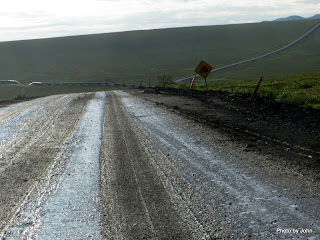 and slop (on a good solid base) were the rule of the day until we hit another long stretch of asphalt somewhere around Happy Valley if my memory is correct. 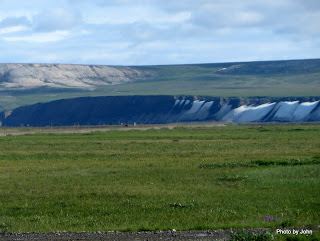 The run from Happy Valley north to Deadhorse was straight forward, 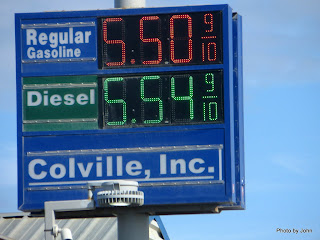 arriving there about noon in time to find a gas station.  Seemed expensive until I considered that we'd paid $7.19 at the Muncho Lake Lodge on our way up the Alcan. 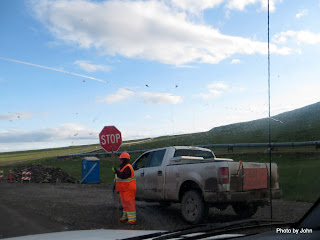 There were some road construction delays of up to 25 minutes during which time we never collected more than 3 other vehicles and at least once I was the only vehicle for the follow car.

With the exception of one short section of very rough construction, the road was much better than all the hoopla would lead you to believe. The biggest surprise was the amount of paving in place.

Verizon cell phone worked with 3G in Deadhorse which got me the message about our dog and expedited my return trip. After an hour in Deadhorse, I headed south, overnighting in the parking lot at the Arctic Circle wayside.
Posted by Just Finding Our Way at 9:00 AM