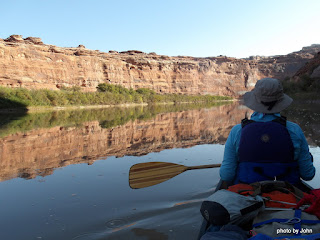 After two nights at a wonderful camp at RM81, we continued downriver. Load out went faster than anticipated thanks to teamwork between the four of us that avoided unnecessary slipping and sliding across the mud at the river edge. 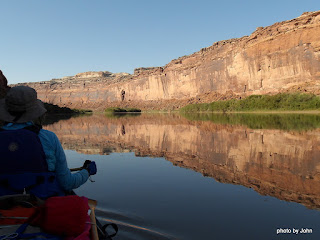 One of the possible advantages of a relatively early start is the beautiful reflections. The downside of an early start when you're trying to stretch out the trip, is you get to where you're going early in the day. 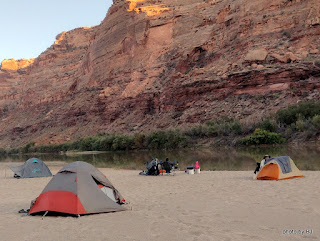 We laid claim to a beautiful sandbar across the river from the Launch Marguerite inscription at about RM73. We had camp set up before lunch and spent the day watching other groups paddle past. This picture was taken after the sun dipped below the western cliffs. Just before dark, a couple gals in a 16' cataraft rowed past. We would see them several more times before the trip was over. 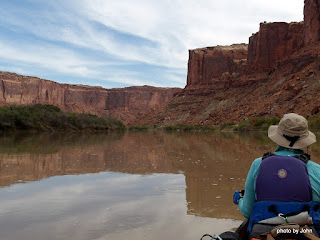 The next morning had high clouds which changed the character of the reflections. We spotted the cataraft at RM71.8 when we went past. Since we'd stayed at Bowknot Bend several times in the past, we all agreed that we would skip it this year. Picking the right line through the shallows near the north side of Bowknot Bend went easier than expected. 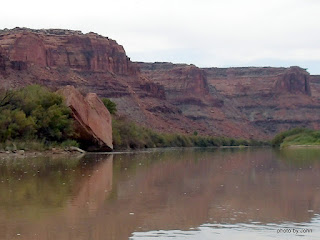 We were all dreaming of spending several days at our all-time favorite campsite but were concerned with the number of parties that had passed us in the past 48 hours. In the spirit of going slowly, we decided to add an night on the mid-river sandbar just downstream of the large heart-shaped rock on the east side of Bowknot Bend at about RM66.7. 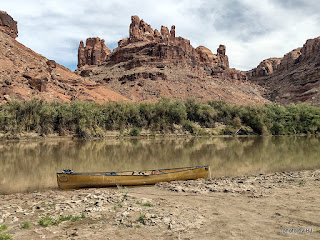 The sandbar had a three inch layer of very slippery mud, but someone had cleared a path down to solid sand in one spot so we unloaded the canoes, one at a time.

About 4:30 or so, the cataraft that had passed us late yesterday landed at a high camp on river right just upstream of us. We've always stayed hard left in this section so I'd never noticed the access before. Maybe next year, since there is a history of mining in that area. 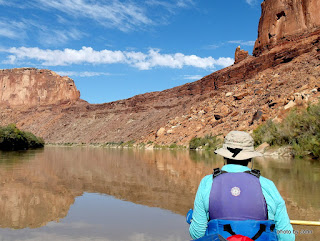 We'd agreed to take our time the next morning, waiting for the sun to hit our tents and dry the condensation from the rain flys before loading. Much to my surprise, the gals with the cataraft were up early and on the river while we were eating breakfast. We knew they were headed to Cataract Canyon, so we didn't think much about it. With just five miles or so to our desired destination, we dawdled and drifted past the south side of Bowknot Bend. 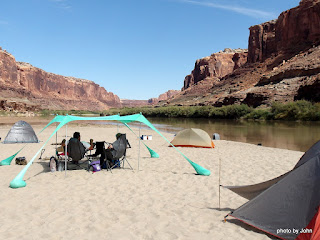 Home for the night was not our desired location, but rather a sandbar midriver near the mouth of Twomile Canyon. The cataraft was unloading at our desired camp as we went by. Turns out, the typical sandbar that shortens the climb up the bank was gone this year so getting into that camp would have been a lot of work. Such is the luck of the draw! Once again, a beautiful sandbar camp but not one that was worth spending another day or two. 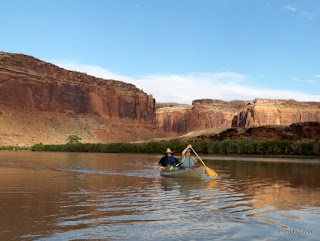 The next morning, we continued downriver, looking for any spot that said "stay here another night" but instead we watched the light changing on the cliffs and the shoals leaving little telltale signs of their existence. 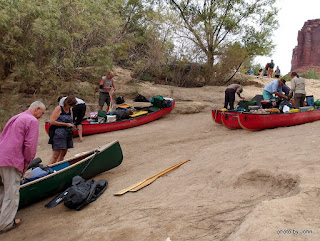 We arrived at Mineral Bottom as several groups were spread out across the launch ramp. We waited and watched and were thankful that it wasn't our canoes that they were dragging fully loaded down the launch ramp. 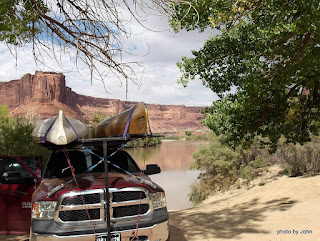 The truck shuttle worked out wonderfully. It was parked where we expected, and even though we were off the river two days earlier than hoped, it made for easy loading up. Nice timing, too! Just as we were leaving, 3 trucks pulled in towing NPS J-rigs and once again the launch was a busy place. 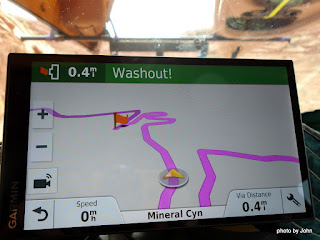 This was the part I'd been waiting for. We've always used an outfitter for the shuttle but this time I got a chance to drive. It's true that there'd been a slight washout a couple weeks prior, but in this case the GPS is referring to a geocache named Washout! 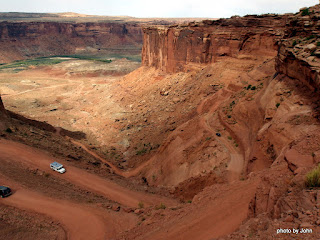 Since I was driving, I got to stop and take pictures along the way. Fair to say, the road is crooked and steep. I'll be back someday with the Silver Subie to spend some time exploring Mineral Bottom and the surrounding area.

As always, you can click on a picture to get a larger version.

Posted by Just Finding Our Way at 11:39 AM No comments: