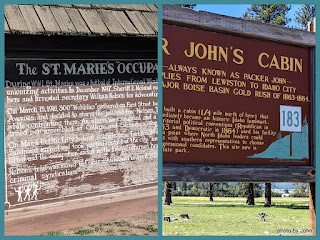 After a couple more days in Spokane with my brother and his family, it was time to see if I could finish off all the remaining counties in Idaho. With the exception of one that was so weathered that it was difficult to read, all the historic markers in Idaho were large and clear. The best part was that many had a geocache nearby. 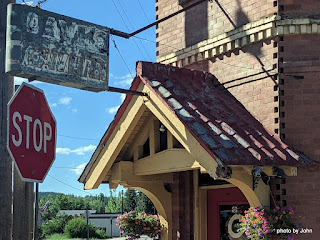 Some signs were easy to read, but after I stopped, I wasn't sure what the other sign was supposed to say. 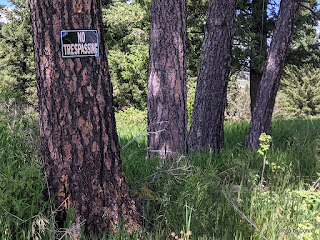 This one, and several others like it, were easy enough to read. Not sure why the geocache was ALWAYS past the sign... 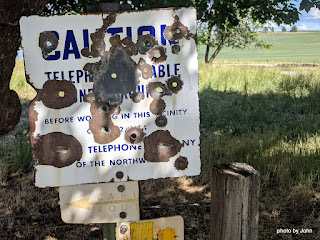 Some signs seemed to be primarily targets. How long has Bell Telephone Company been gone? 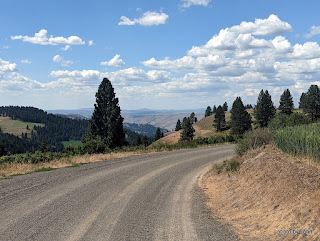 I enjoyed some beautiful gravel roads up and over massive hills. They'd had a bit of rain in the recent past, so in most cases, the gravel roads were nearly dust free. 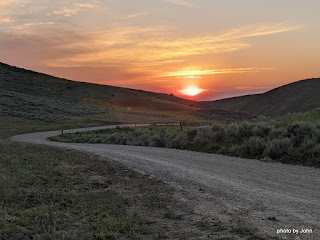 My favorite boondock of the whole trip was here, alongside another minimally travelled gravel road east of Emmett. The sunset was beautiful, but it was the hour+ long conversation with the landowner that made it special. His family had been on the land for four generations and it was clear that he loved the land. 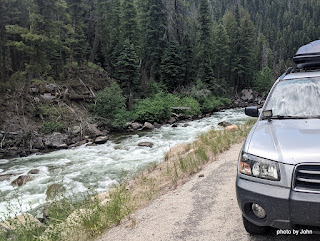 Cleaning up counties in Idaho isn't easy because all the valleys and rivers run north to south so I'd drive up one valley to a pass, and then down the next one, slowly working my way east. 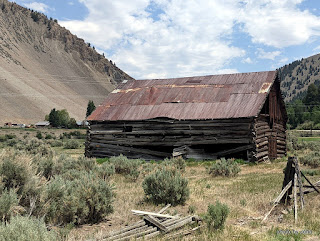 Every now and then I'd stop just because the old buildings spoke to me. I wonder about the stories to be told about settling this land. 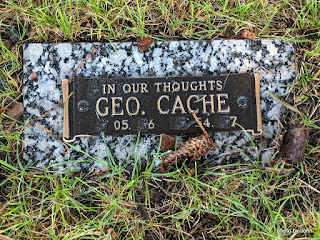 Most of the geocaches were non-descript, but someone put a lot of effort into this waypoint for a cemetery multi-cache.

It was about this time that the Silver Subie started showing signs of ill health. Clutch travel was slowly, but noticeably, changing. I got as far as a series of challenge caches outside of Atomic City when I decided I couldn't ignore it any longer. 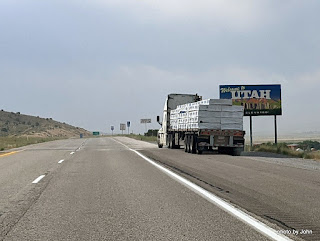 After a consultation with the Subaru dealer in Pocatello when the Service Center opened - a consultation that primarly consisted of "we can't look at it until early next week" - I pointed the car towards home. The plan was to see how far I could get before I needed to put it on a trailer.

Utah wasn't in the route plan this year, but it was the shortest and fastest way home! 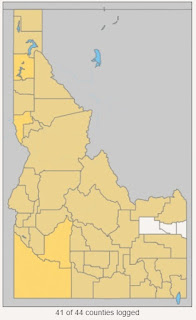 It was a 981 mile day, but I got home that evening without needing to trailer the Subie. I parked it in a corner and put the dunce cap on it. It will get some attention one of these days soon.

Unfortunately, it means that I have three counties orphaned in eastern Idaho. Obviously, I'm going to have to go back - maybe next summer.

Posted by Just Finding Our Way at 2:42 PM No comments: 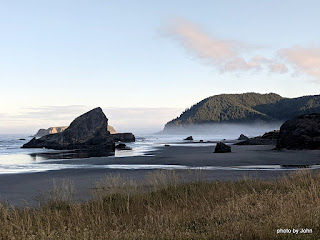 After a good night's sleep at a boondock north of Brookings, I continued to pick off my missing Oregon counties with a drive up Highway 101. I had most of the counties, but that wasn't going to stop me from enjoying the view. 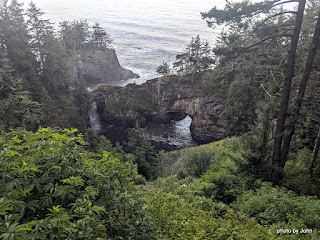 There's a little arch in the rock down at water level that I never would have noticed except for the virtual cache that mentioned it. 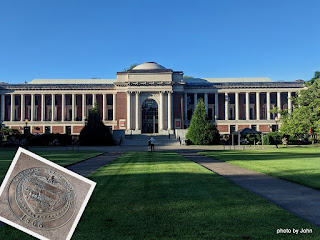 I took advantage of some state forestry land east of Eddyville for another good night's sleep. As all good boondock spots, it was far enough from the highway to mask the noise and had good connectivity so that I could get my caches logged.

The next morning I started with a visit to the University in Corvallis so I could get my picture taken - twice. There are two surviving webcam caches here! 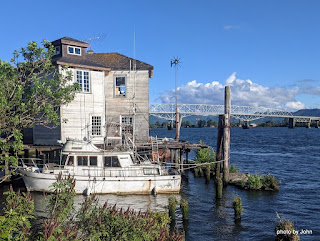 I snagged a whole batch of well maintained challenge caches near Talent, Oregon and spent a couple hours with a very good friend in Newberg before heading to Scappose. The plan was to work a challenge trail there, but after getting "enough" to claim the county I left since they appeared to be very poorly maintained. Home for the night was another boondock near Cathlamet, Washington. 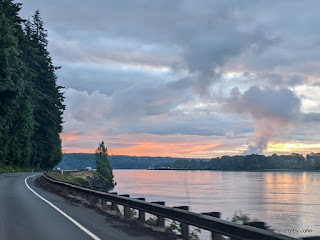 With my typical early start, I headed up the Columbia, first on the Washington side, and then switching to the Oregon side. 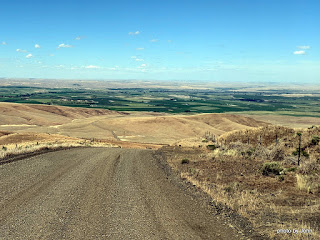 That afternoon found me working a challenge trail in the high hills west of Milton-Freewater, Oregon. I took advantage of one of the several snow parks along Highway 204 for my home for the night. Once again, I picked a spot with no one around, no noise, and decent connectivity. 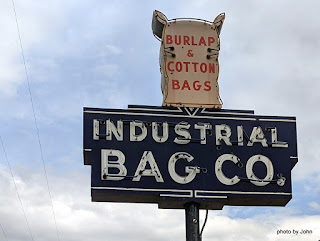 The next morning I finished up the last of my Oregon counties and started on the ones that I'd ignored in SE Washington. The caches weren't memorable, but I loved my time in Pomeroy. There was a large collection of classic signs and antique vehicles that deserved more time than I gave it!

The Subie started sqawking at me a bit, so I changed up plans and headed to Spokane, making sure to pick off my last two SE Washington counties along the way. 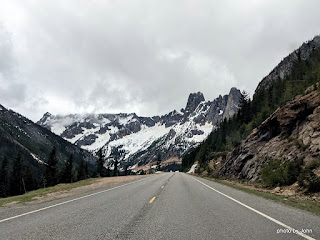 After a couple layover days with my brother and sister-in-law in Spokane, and a quick, easy fix that was much easier in their garage than at my planned boondock, it was time to head north and west. For some reason, in spite of visiting both several times, we'd never logged caches in Ferry or Okanagan counties, so I fixed that oversight. 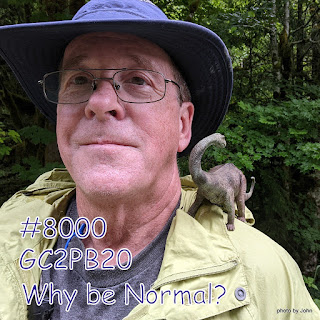 As I was wandering across the northern expanse of the state, I realized that I was approaching a milestone. Facing a series of challenge caches, I shuffled the sequence because I thought the name of this one pretty well summed it up! 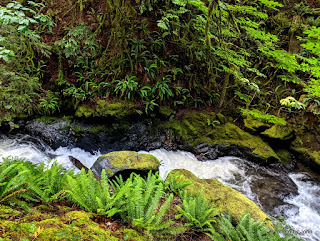 With the milestone out of the way, and rain coming down, I had my pick of campsites at South Grandy Lake along the road to Baker Lake. At least I know how they keep things green and mossy! 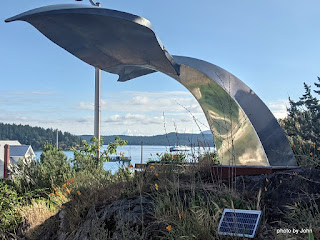 I had one more county to complete my Washington counties, and it involved ferries. Parking at the ferry terminal cost nearly double what my walk-on ticket to Friday Harbor cost. I found all of the caches I looked for within reasonable walking distance, and then wandered around town, amazed at the changes since I'd last visited. 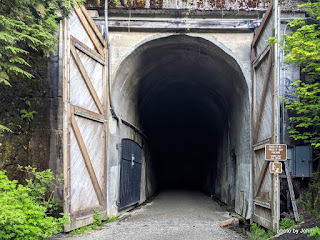 After a morning meet & greet with several folks from Geocaching HQ, another reviewer, and some other cachers, I chased around visiting some of the high favorite caches in the greater Seattle area and ended that day with a very nice boondock overlooking a full (seems like the stumps are showing usually) Lake Keechelus in preparation for a priority. 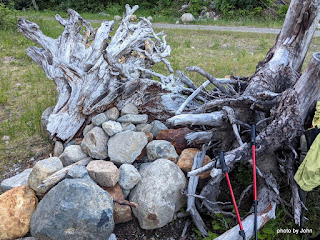 I started through the tunnel at 5:30 a.m. and had the whole hike (both ways) all to myself. The goal was a very rare geocache. BJ and I had visited several years ago but the cache was missing at that time, so it was nice to come back and log one of the two remaining Project APE caches. After the APE cache, I visited the challenge caches in the area and then headed back to Spokane.
Posted by Just Finding Our Way at 5:34 PM No comments: