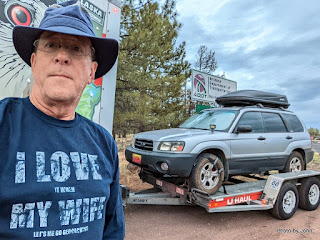 As I was dragging the sick Silver Subie home from my last trip, I wondered what would come of my planned trip to British Columbia. This is a trip that was originally planned to happen two years ago, but we all know what happened! 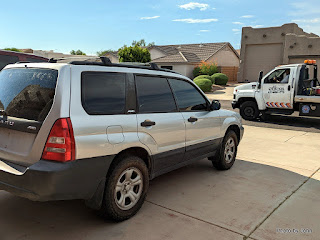 I've loved the capabilities of the old Subaru, but after considerable discussion together, we've decided that it's not worth investing yet more time, effort, and money. Instead, I removed the top box and the easily transferable mods, and sent the Subie off. When I get back from the next trip, we'll likely do some shopping. Maybe something even more boxy and much younger! 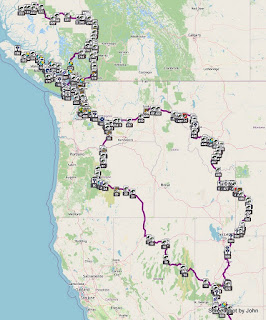 For the upcoming trip, I'll use BJ's Subaru Outback. It has less headroom, but more length. I should know better than to share the plans, but her Outback is 13 years younger and has 185,000 fewer miles than the Silver Subie.

The plan is to take head toward Bend, OR, spend a couple days there, then to the Skagit Valley for a High School reunion for geezers. 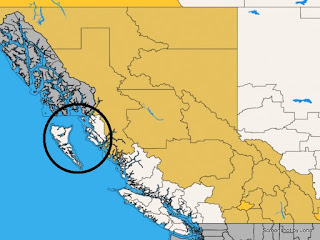 We cached in all of the eastern "regional governmental units" of British Columbia when we did our last Alaska trip in 2019. If I'd been smart, we would have turned right when we got to the south end of the Cassiar Highway to visit Prince Rupert, but instead we headed east. I'm leaving Prince Rupert out of my plans this summer - it's now 1,000 miles out of the way! 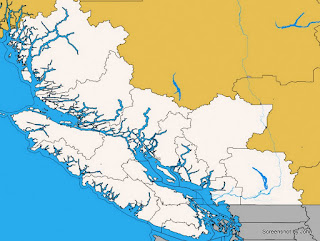 Thanks to a two week gap between the reunion I'm attending and the very large geocaching event in Abbotsford, I'll have time to visit all of the remaining "counties" in the southwest part of BC. I'll start with Vancouver Island, then cross to the Sunshine Coast before continuing to Williams Lake and out to Bella Coola before returning to the Abbotsford area. 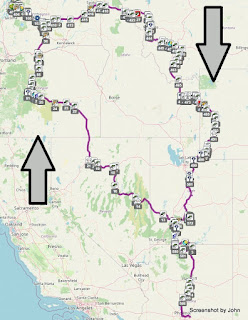 If all goes as planned, after attending another major geocaching event in Seattle, I'll head home via Spokane and western Montana which will position me to pick up those orphaned counties in Idaho & Wyoming.

Posted by Just Finding Our Way at 9:00 AM No comments: 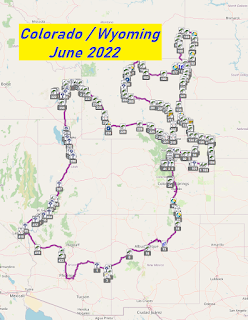 It's been a long time since I've posted here, but this is the easiest way to document my more extensive trips. With Turk aging to the point that he doesn't do stairs or like to be picked up, the trailer stayed in the garage and I took the Silver Subie on what was planned to be two week loop through the mountain west. This was going to be the first of two major Subie trips planned for the summer. 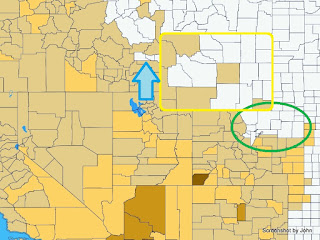 The primary intent was to find caches in the 16 remaining counties of Colorado, but I also wanted to find a few caches in both South & North Dakota for a challenge cache I'm slowly pursuing. If all went well, the trip would finish my Wyoming counties and pick up the Idaho counties I orphaned last year. 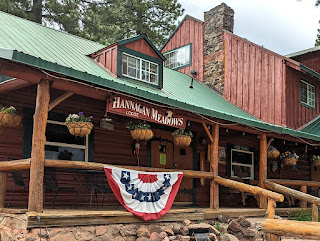 I started the trip early on Saturday, June 11th headed east to a mid-day gathering at Hannigan Meadows at over 9,000 ft elevation. The plan was to do the trip counter-clockwise, trying to stay to high country as much as possible in a search for lower temperatures and geocaches. 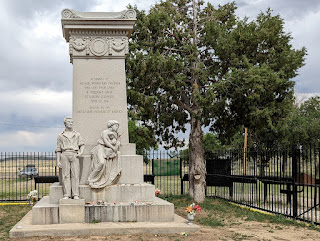 Along the way, I attended several geocaching events, and as usual discovered things that I would have bypassed if it weren't for geocaching. For example, I learned some interesting labor history when I stopped at the site of the Ludlow Massacre where 20 people died protesting conditions in the coal mines. 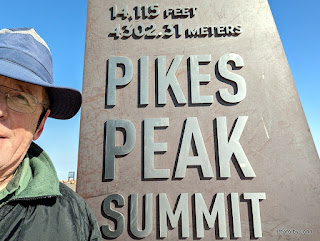 One of the highlights for me came early in the trip. I'd tried to visit Pikes Peak last year when I picked up the southeastern Colorado counties after the Subie died in Idaho. The day I had in the schedule turned out to be the day they were dedicating the new Summit facility and they weren't allowing any uninvited guests. This year I had a reservation! 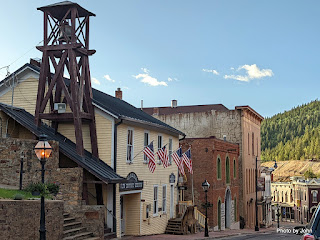 In keeping with my quest to stay at elevation for cooler overnight temps, a campground outside of Central City, Colorado was home for a night. I love these out-of-the-way towns with history and grit. Now it's a town full of casinos. 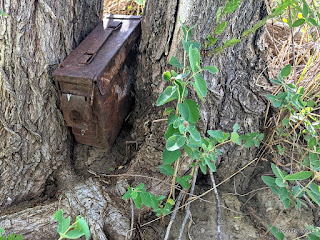 Some of the geocaches had been in place for awhile. The ammo can was rusted, and it was also immovable! The trees had squeezed it enough to bend the sides, but the lid could still open so I could access the logbook of this seldom visited geocache. Five days in, and I've finished the remaining Colorado counties. 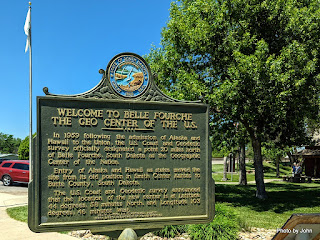 You never know what you'll find when you wander. Who knew that Belle Fourche, South Dakota was the geographic center of the U.S.? 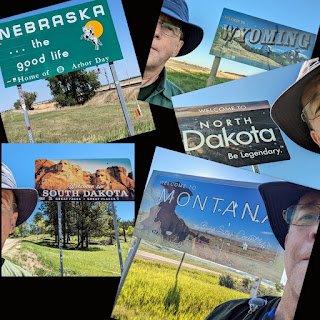 It was a long day, but in the process I cached in five states: Nebraska, Wyoming, South Dakota, North Dakota, and Montana. Home for the night was an interesting little state park north of Ekalaka, Montana 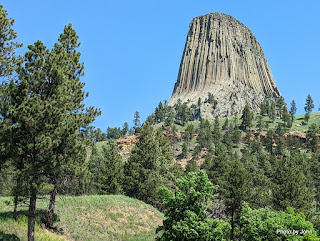 Devil's Tower was another highlight of the trip. Located in NE Wyoming, it has always seemed too far out of the way to visit. I took the time to walk the trail around the base of the tower. From the trail, it is MUCH bigger than it looks from a distance, but because of the trees, the better pictures are taken further away. 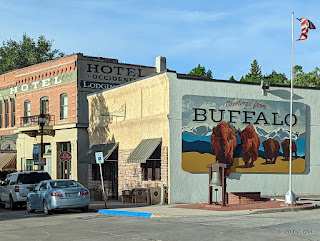 It's notable how many small towns have leveraged some nice murals to dress up their downtown area. I really enjoy the art. 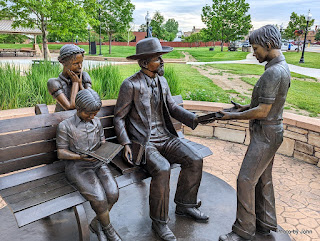 In Sheridan, the town has created a very nice park complete with several bronze pieces. This one features a man who regularly provided books to the young folks in town. 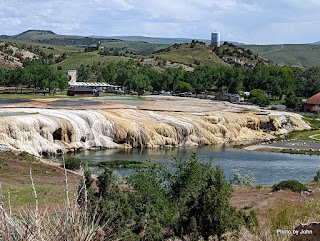 BJ and I spent a night at a cute little RV park in Thermopolis a number of years ago, but this time I got a chance to wander through part of the state park that highlights the hot springs. The plan was to boondock at a wildlife preserve about midway between Laramie & Rawlins on the 9th day of the trip but when I came off the exit the engine set up a terrible clatter. It took several hours (and AAA was NO help whatsoever) before I was able to organize a tow truck. Tossed a coin and decided to go back to Laramie since it was a larger town. 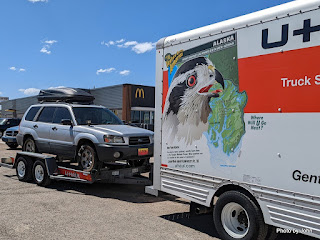 Diagnosed as rod knock, I rented a U-Haul, loaded up, and headed home, leaving two orphaned counties in Wyoming. I was very fortunate to walk to a cache in  Carbon County while waiting for the tow truck so at least I've got that one! 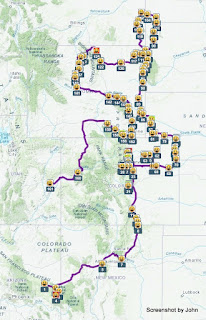 As usual, I didn't find everything I looked for, and in many cases, I quite looking once I had three in a county, but unlike the planned trip, this is what it looked like when the Subie got home.  The cache in western Colorado and the one in Utah were done on the drive home with the U-Haul. 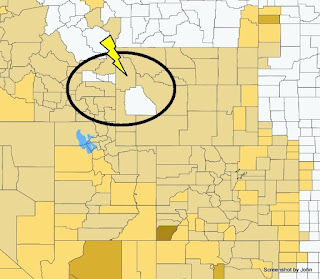 Jefferson, Madison, and Teton Counties in Idaho are still orphaned, but now they are joined by Teton and Sublette Counties in Wyoming. We actually have one cache in Teton County, Wyoming, but it is a virtual cache and one of the county challenges in Wyoming requires the qualifying caches to be physical caches. At least all five counties are nicely grouped together!
Posted by Just Finding Our Way at 11:56 AM No comments: