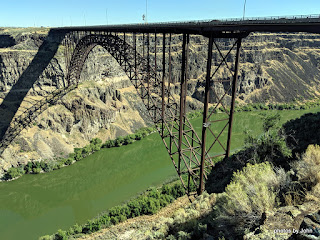 We left Nampa, heading eastbound with more freeway miles than we'd had on the trip to this point. We did a bit of zigging and zagging to pick up up a line of contiguous counties but took very few pictures other than this one at Twin Falls. We spend one night at Massacre Rocks State Park west of Pocatello. Since it was mid week, we could get a senior discount on a water/electric site which was nice given the warm afternoon temperatures. 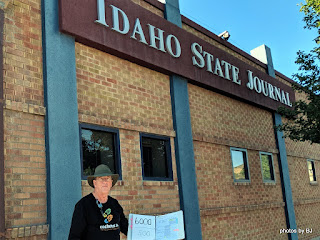 The plan was to make an early stop the next morning at the Idaho State Journal since there is a webcam cache located there that would have been a milestone cache for me. I tested it on my phone the night before and it worked well, but when we "needed" it, it didn't work so we moved down the road to another cache for that milestone. 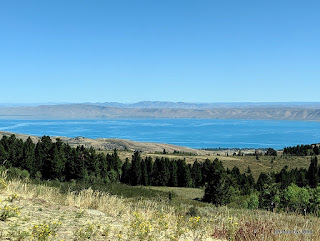 Our line of travel was very crooked and counter-intuitive, but I was trying to add new counties and we were trying to stay high in hopes of cooler temperatures. It was a nice idea but didn't work as well as we'd hoped. The drive was beautiful with temps often hovering between 85 and 90. 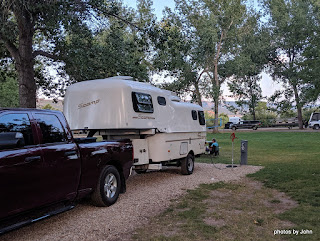 I'd planned to stay at a state park with dry sites but decided the air conditioner was essential so we pulled into a picturesque RV Park in Coalville for the night. Friendly folks, nice facilities, but also freeway traffic noise all night. 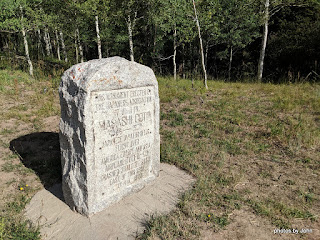 Out of Coalville we headed up again, stopping on occasion for interesting historical monuments, 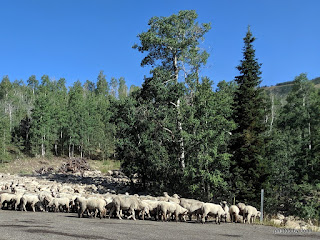 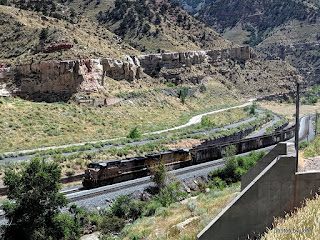 and sites of famous mine disasters. 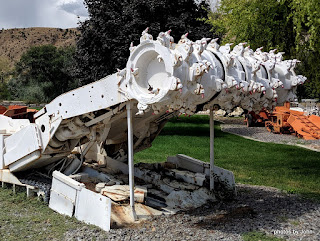 In Helper, we stopped to check out a variety of coal mining equipment including this mechanical back scratcher. 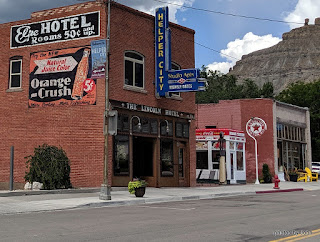 Loved the old, small towns scattered along the two lane highways. Even better, traffic was minimal! 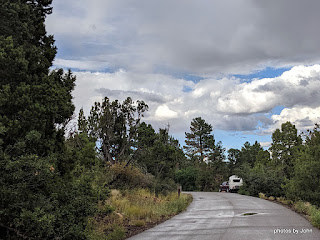 We toyed with staying in Moab. We did stop, and managed to snag some late season shuttle dates for a short Green River trip, but then kept going for higher ground. After twenty years of driving past it, we stopped at Devil's Canyon campground south of Monticello. The short thunder storm did the trick to lower the temps, and we enjoyed a very nice night in a $5 site (thanks to our senior discount.) 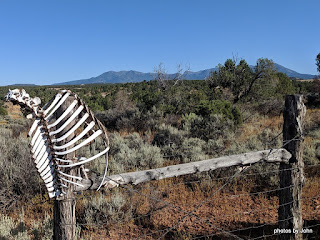 We took time the next morning to do a Wherigo cache that took us on an interesting tour of Blanding. Managed to do it all with the trailer in tow, although getting turned around at the final was a bit tight. 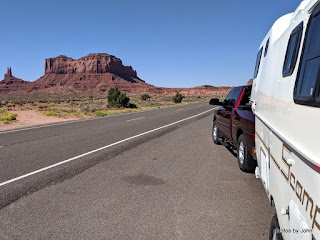 As we often do, we stopped for a couple pictures in Monument Valley and then headed for our last night of the trip at Bonito Campground outside of Flagstaff - again, selected for the elevation. 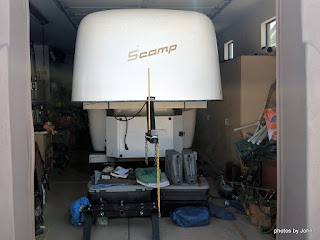 110 nights, over 10,600 miles on the trailer, over 12,500 miles on the truck. We averaged just under 14 mpg for the trip with gas averaging $3.90 when converting to US dollars and gallons. Thanks to a bunch of boondocking and moochdocking opportunities, our camping costs averaged $14.91 per night.

Not only is the Scamp in the garage and the trip over, this post represents my 950th blog post. No telling when or if there will be another one. Time for a break??
Posted by Just Finding Our Way at 2:30 PM 5 comments: