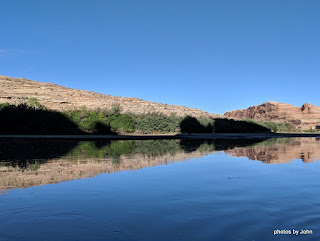 We departed our sandbar camp at river mile 90 on our third day of the trip. While we've done the trip many times, it is always different - the channel, the sandbars, and what we see. This time we were surprised to see three cows on a small sandbar at the lower end of June's Bottom. We've been doing this river since the fall of 2000 and this is the first time we've run across cattle at the river. 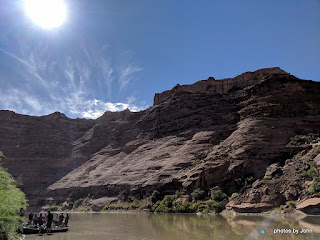 It's my preference to start the day early and to end early. This has generally served us well, taking advantage of the morning calm, and often getting first pick at campsites.

In this case, I was targeting the high water camp at river mile 81. We've never stayed there, and never noticed the trail to it, but there was supposed to be a geocache there that had never been found. We arrived just as the group that camped upstream from us on the first night was breaking camp. 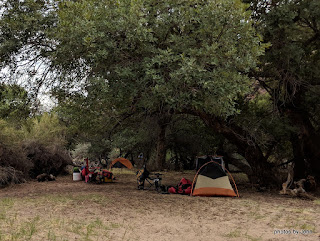 As is typical with high water camps, it's a bit of work to get the gear from the river to the ledge that is high enough to stay dry at most springtime flows. The camp featured oak trees providing dappled shade which was really nice given the 90 degree daytime temps.

The mule deer enjoyed this camp as well. We saw at least five hiding in the shadows. 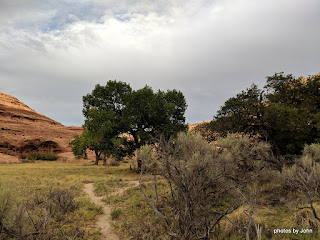 Behind the grove of oaks was a grassy bottom, showing signs that it was sometimes flooded during the high water season. The cache was reported to be about the same size as the acorns scattered around, but was nowhere to be found. 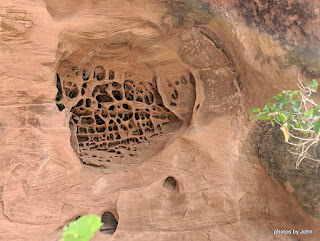 Back against the cliffs were some stellar examples of tafoni. 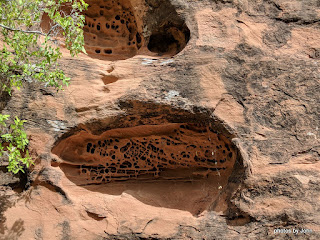 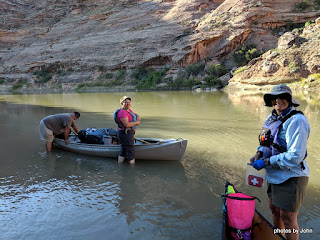 This was the only camp where we stayed just one day. On the fourth day of our trip we once again loaded the canoes and continued off downstream with two objectives in mind for the day. 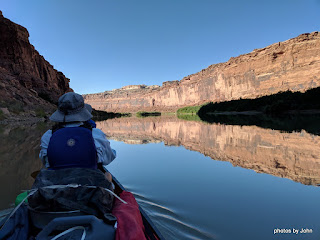 The morning shadows were dark and the water was glassy. Oh, what a beautiful day! 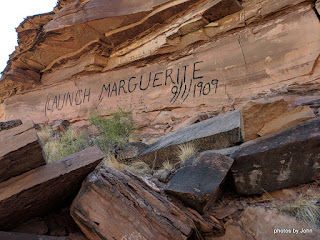 The 25 foot long sternwheeler launch Marguerite passed by here over 100 years ago, and left their mark above the river. This one has survived well because of the rock overhang that protects it from some of the direct weather.

For years, I've looked for a place to stop and this time we were successful, landing just downstream on a rocky shore. BJ and I were able to leave our mark in the geocache placed by a member of the Wimmer family. 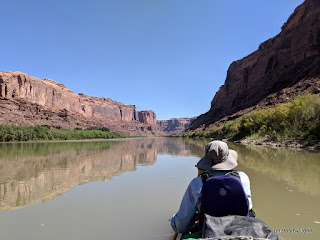 The sandbar this year was closer to the river right shore than previous years and I ended up walking a ways with the canoe to get in to the steep takeout. 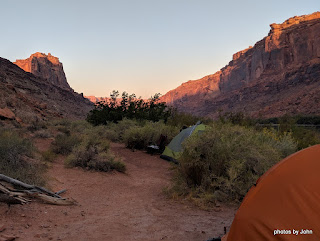 Camp for the next two nights was at the very same place we spent three nights on our 2014 trip.