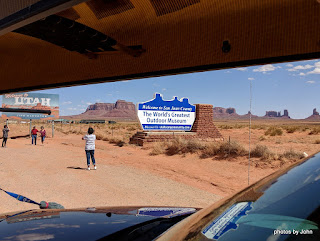 It's a 500 mile drive from our place to Moab, but the road goes through Monument Valley which is always a special place. On rare occasions, we've been smart enough to break the trip into two days, but this time we departed at 5:30 a.m. and drove straight through with a few breaks for BJ to walk and stretch. 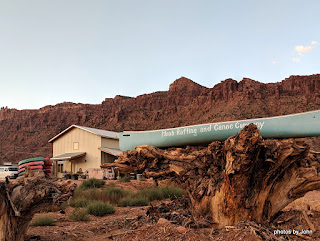 We showed up early Monday morning at Moab Rafting & Canoe Company which surprised them, but gave us some time to get acquainted with them before the morning rush. 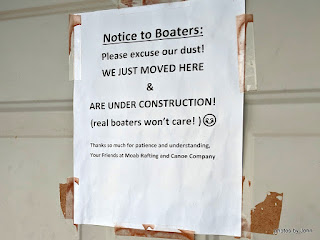 The front door sported an interesting sign indicating they just moved to this facility and setting some basic parameters. 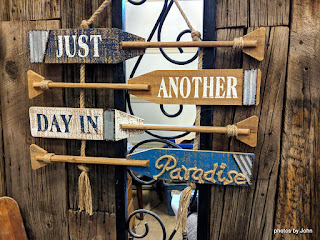 In the office area there were a few indications of whimsy. The owners bought the business three years ago, and have brought their smiles and sense of humor to the business. In addition to shuttles for self supported trips, they also do guided trips. Kevin was describing the menus on their San Juan River guided raft trips. Sounds like an epicurean delight! 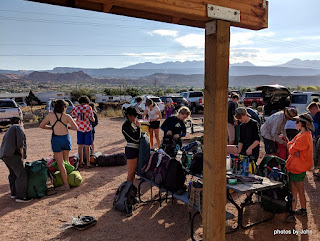 Eventually, a group of high schoolers and their leaders showed up. It immediately was clear why we weren't able to add another person to our group. Kathy & Willy launched a day early to resolve that challenge. Not only were the high schoolers late, but they were also disorganized. Apparently the school does the trip annually but hasn't figured out their system yet. 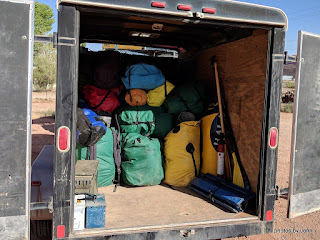 Kevin was thoughtful and recognized the impact on our trip. He arranged for our gear to be loaded by the side door so it could be unloaded first when we got to Ruby Ranch. 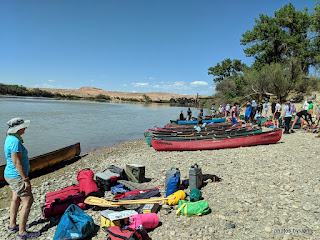 In addition to the 11 canoes with the school group, there was another group of seven canoes that were getting organized. We carried our gear a little further down the beach and then quickly loaded our canoe. 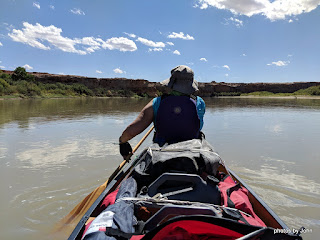 Since we'd done some gear fitting at home, loading the canoe went quickly and everything fit like we'd expected. The weather forecast was calling for afternoon winds up to 15 miles per hour so we didn't waste any time getting moving. Besides that, we wanted to find Kathy & Willy and get camp set before the hordes descended. 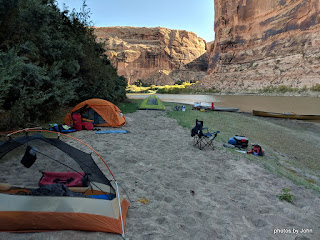 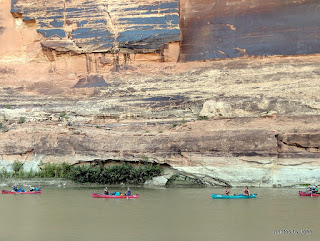 Our camp was organized by about 2 p.m.  About 4 p.m., the group of seven canoes claimed the upstream section of 'our' sandbar. About 5 p.m., the high school group paddled past. Since our trip was planned with several layover days, this is the last time we saw these very polite students since they were on a four day schedule. 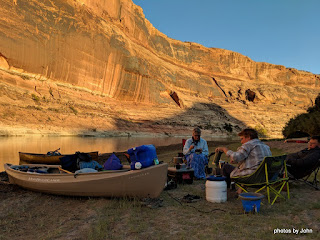 The weather for the trip was calling for 85-90 degree days, 55-65 degree nights, calm mornings and breezy afternoons. We appreciated the afternoon shade that this camp provided. 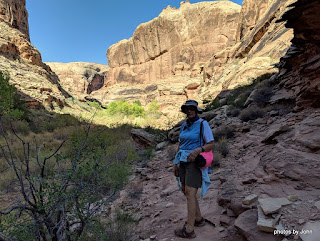 On Tuesday, we paddled across to Trin Alcove and went exploring. We had BJ set the pace, but had to get some pictures for her physical therapy team. She was pleased her back didn't act up and that she was able to get out and spend some time in the outdoors. 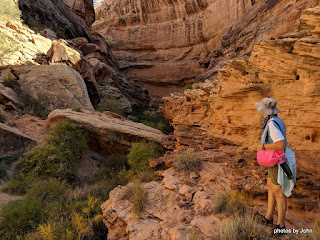 Trin Alcove, by definition, should have three alcoves, but it seemed like there were more than that. Weather has been dry and the river is low and steady this year, making for easy hiking once we got past the tamarack at the river's edge. 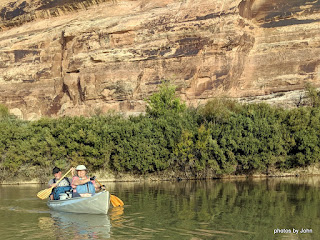 After two nights on the sandbar at Trin Alcove bend, we headed off down the river. With just four people and two canoes on this particular trip, loading was quick and easy. 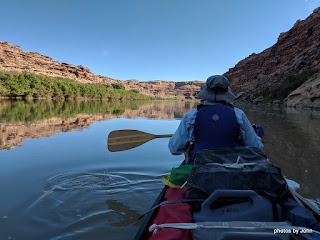