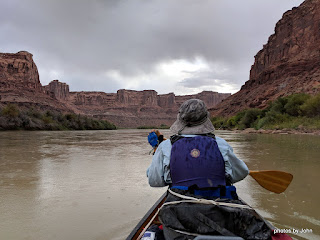 It was only after we had the boats loaded and we were a mile or so downriver from our camp that the dark clouds decided that they actually did contain some rain. I thought about digging out my rain gear, but it was warm so we paddled on. 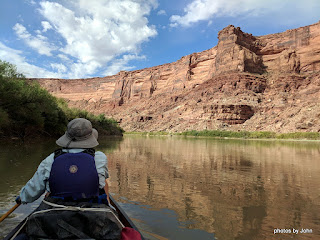 Within 20 minutes or so, the skies cleared and the sun came back out. It seemed only appropriate with with 8 nights of camping on the river, we should have a few minutes of rain. 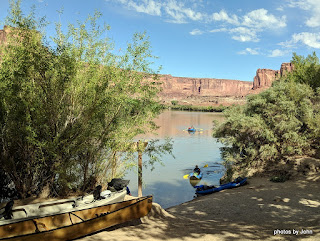 We arrived at Mineral Bottom a day early, simply because it is easier to avoid the hassle of a busy ramp and risk of upstream winds for the last morning.

A group of paddlers from Phoenix camped about a mile downstream of us last night but hadn't broken camp when we passed this morning. We had our boats cleaned and stowed when they starting arriving at the Mineral Bottom boat ramp. 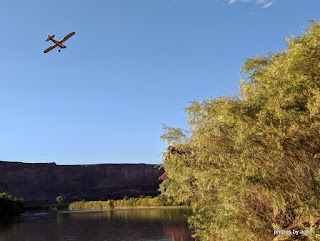 We'd been buzzed by a Mooney M20 at our last camp, and then by a Husky and a Super Cub during our paddle from our RM61.5 camp. In the afternoon, a couple different planes flew over, checking out the Mineral Bottom airstrip. 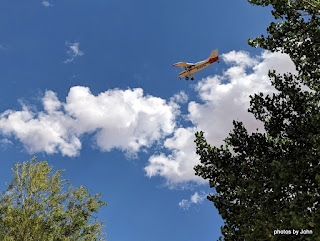 A Super Cub landed first, followed by a Maule 180. Later, a couple Kitfox homebuilts made multi passes at the airstrip. Finally, one of them attempted to land, but was downwind. We couldn't see the landing, but we could hear it. Some of the sounds were not congruous with normal landing sounds. A bit later, the other Kitfox landed. 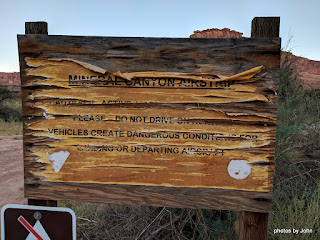 At 7 a.m. the next morning, I walked over to the airstrip (about 3/4 mile from the boat ramp) since I had a couple decent pictures of the Maule on approach that I thought the pilot might like. 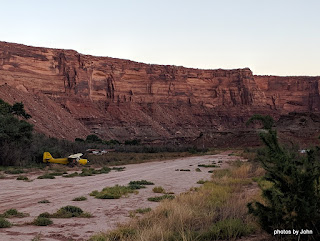 The signage for the airport is pretty tired, but the strip looked great - at least when it's dry. It's 2000' long, and wider than I expected. It would be really soft and slippery when wet. Turns out, all the pilots were planning to camp at the airstrip overnight. 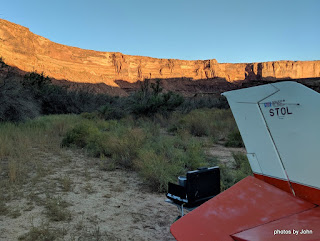 The pilot of the Maule was making his morning coffee when I got there. We had a very interesting chat about his flying trip to the southwest, specifically to visit some of the back country airstrips around the Four Corners area. He was heading to the area around Page, Arizona next. 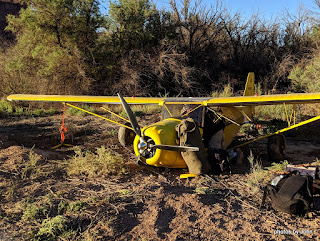 Turns out, there was a reason for the incongruous landing noises from the first Kitfox. Somehow, the pilot managed to avoid any apparent wingtip damage, but was very successful in removing the main landing gear in a manner that wouldn't be considered appropriate by the aircraft designer. The question the pilot asked me was could a 20' trailer be towed down the road to Mineral Bottom. Looks like this one is going home in a different manner than it arrived. 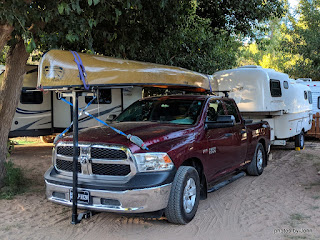 After the shuttle back to town, we ended up back in the very same site at Pack Creek Campground that we'd been in before we left for the river. Pack Creek was willing to allow our trailer to stay in their overflow area while we were on the river. 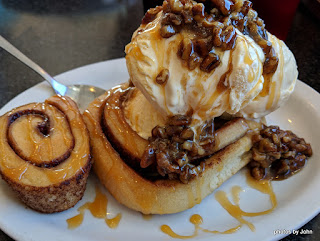 The parking lot was full to the brim at the place that we normally enjoy our after trip dinner so we headed to the Moab Diner which has wonderful green chili and amazing desserts at very competitive prices. 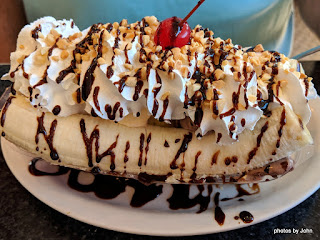 When was the last time you saw a real (and BIG) banana split for less than $5? 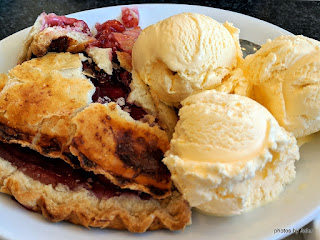 There were only three desserts - apparently someone who will remain unnamed was still on a river diet.
Posted by Just Finding Our Way at 2:30 PM