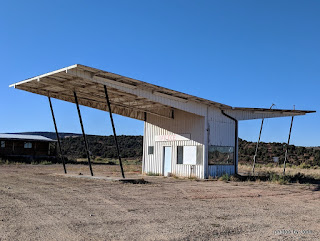 We drove a little ways out of Moab before taking a left turn. We've always taken the shortest, fastest way home, but this time we stopped to check the maps. The office was closed, but we were on the right route to cut up and over the southern side of the La Sal Mountains, headed for Colorado. 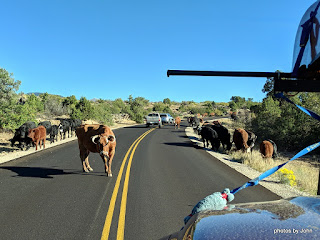 We hadn't gone far when we noted a Sheriff's pickup with lights flashing coming the other way. Turns out, the deputy was running lead for a cattle drive. Some of the cows were apparently hungry, one seemed to want to face off, 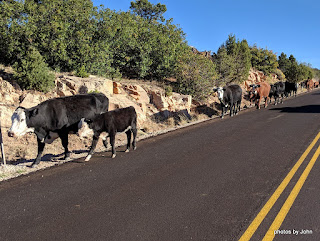 but most wandered down the edge of the pavement, headed towards lower country. 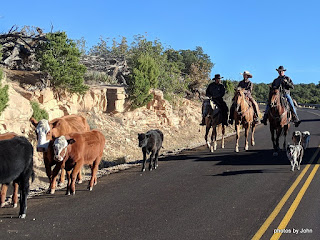 It gives you the impression that the three cowboys were riding drag, but around the corner was another sheriff's vehicle providing support. A couple miles up the road we spotted a cow/calf pair that apparently escaped the cowboy's attention. 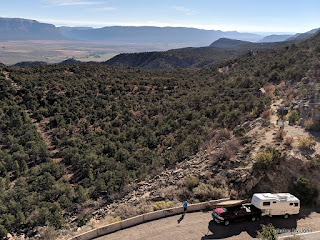 I had a few spots picked out to stop along the way so BJ could stretch her legs and I could look for geocaches. I wanted to pick up caches in three new-to-me counties but I didn't find the caches at the first two stops. I did find a really nice view, however. 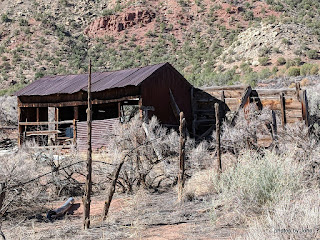 The big town of Bedrock was my last chance for a cache in Montrose county. Choices were limited for caches that also had enough space for us to park safely. 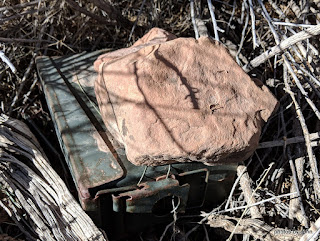 Found it - an ammo can under a rock. 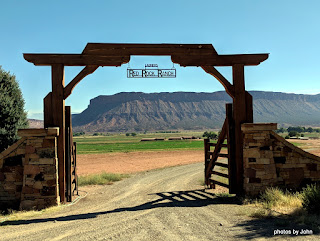 The views were pretty special. 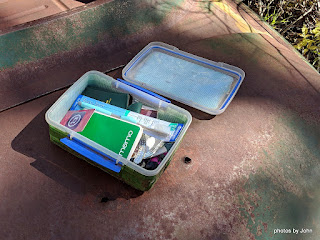 We stopped at a cemetery in San Miguel County and then continued on to one of many fishing spots along the highway where the hint was vroom, vroom, CRASH. 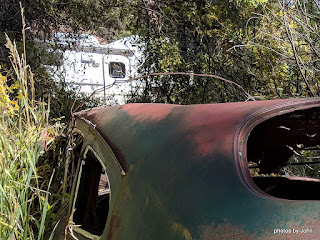 All the markings were gone, but I think it may have been a Hudson at one time. 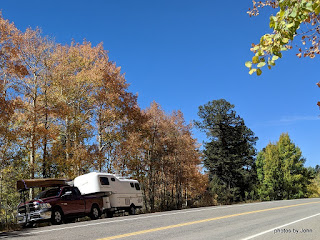 As we got higher, the aspens were starting to lose their leaves. 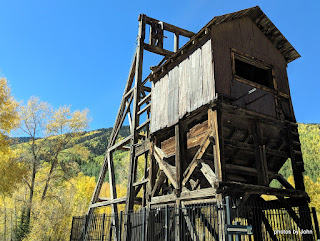 We made a quick stop in Rico to find a Dolores County cache which meant I've now found caches in 10 Colorado counties. I still need two more states with 10 counties before I can claim a "find" on a challenge cache in New Mexico. 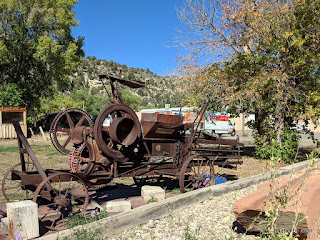 We made another stop in the town of Dolores where I wanted to check out the old hay bailer. Three years ago, I was unable to locate the cache here. This time it took less than 3 minutes.

Home for the night was the Wally World parking lot in Cortez where we crossed paths with geocaching friends who winter in Apache Junction. 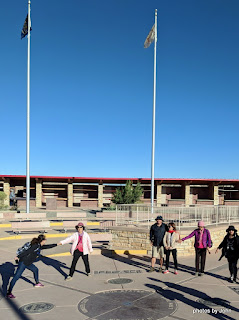 We really wanted to make time for a side trip to Durango but decided that would have to be another time. Instead, we headed to Four Corners. Initially our plan was to overnight at Canyon de Chelly but we decided it was early enough that we would keep heading south. 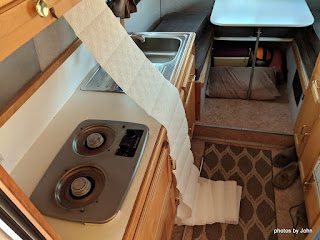 By late afternoon, we were home again, with proof that the roads between Four Corners and Holbrook were some of the roughest we've seen since our Alaska trip five years ago!