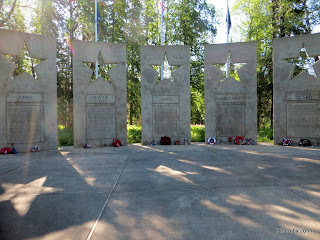 On the east side of the Parks Highway at Milepost 147 is the Alaska Veteran's Memorial. The sign says "We dedicate this quiet place to the remembrance of the veterans of Alaska who have served their country at home and throughout the world. We honor their heroism and dedication." The main part of the memorial consists of five panels for the five Armed Services. 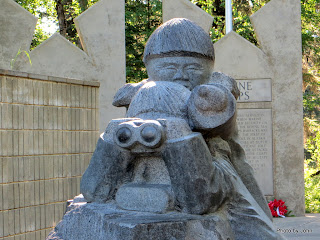 There are several plaques honoring groups such as the Merchant Marine, the National Guard, victims of a C-47 crash that happened nearby, and others. I especially liked the sculpture honoring the Alaska Territorial Guard who volunteered for local duty when the Alaska National Guard was called up during the Second World War. 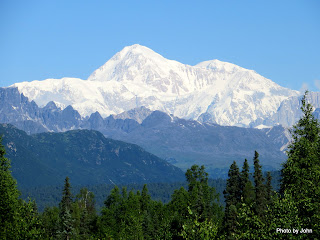 The location was chosen because it was midway between Fairbanks and Anchorage, and because it offers a wonderful view of Denali, at least on there.

It's well worth a stop.  In addition to the memorial, there is a Visitor Center on site. 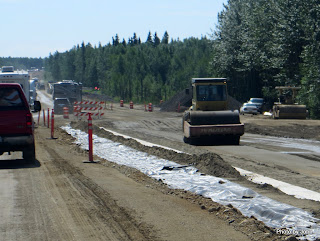 By the way, we did get a chance to see how Alaskan roads are built.  There are several inches of foam over the base, then a layer of sand, then a layer of what appears to be a geotextile, then additional base before two lifts of asphalt. Lots of work -- not sure if it makes a significant difference.
Posted by Just Finding Our Way at 1:30 PM