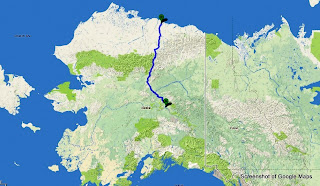 It goes by many names - Dalton Highway, Alaska 11, the North Slope Haul Road, or simply the Haul Road - and is surrounded by much mystic, "war stories," and at least one television show. Being of an age where a number of acquaintances worked on the slope building the pipeline or the road, it's long been on my list of places I wanted to see for myself. 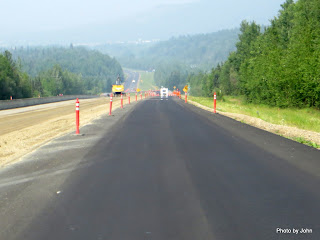 We made the decision some time ago to leave BJ and the trailer in Fairbanks, so I did the trip solo with the pickup and a tent.

Technically, the Dalton is 420 miles long, but that is because it starts about 85 miles north of Fairbanks. The first section is part of the Steese and Elliott Highways which are all paved, including some pavement that was so new that it wasn't finished yet. 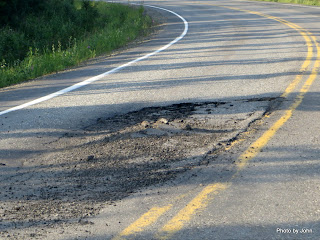 This section also included some pavement that had entered the inevitable breakup stage, some with chip sealed repairs, and some with the requisite frost heaves. 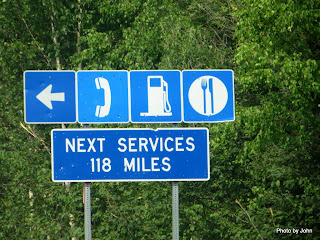 Approaching the Hilltop Truck Stop ("Famous Pies") just north of Fox, you're given fair warning that this isn't a trivial trip. One hundred eighteen miles to Yukon River, about the same from there to Coldfoot and then two hundred forty miles between Coldfoot and Deadhorse without services. 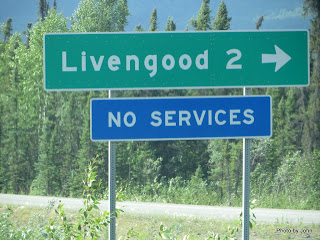 It has a nice name, but with 24 residents if everyone is home, Livengood isn't going to be much help to a traveler in distress. 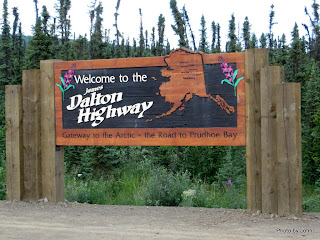 The start of the Dalton is the first section of gravel, and features a beautiful new sign just about a mile from the junction with the Elliott. 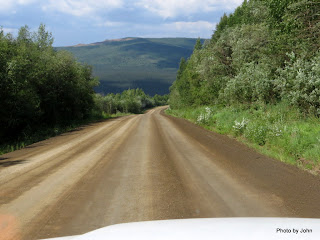 Most of the gravel on this first section was hard packed or relatively freshly graded. Now and then there would be a short section of washboard and occasional chuckholes, most of which could be easily avoided.

Speed limit was posted at 50 although the trucks run faster when they're empty. 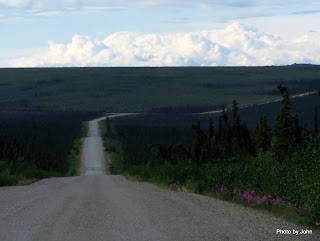 There were lots of curves and slopes, some in the neighborhood of twelve to fourteen degrees 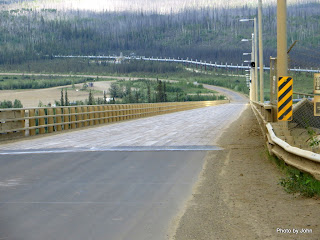 including the Yukon River Bridge which had a nine degree slope and a wooden deck in excellent repair. 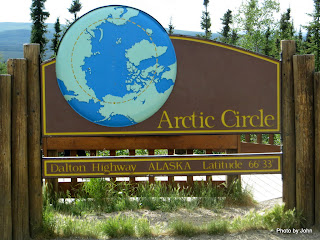 The Arctic Circle Wayside was a required stop but the road doesn't rate any pictures since it was all paved for over 100 miles into Coldfoot. The paved road had some rough repairs and lots of frost heaves, but nothing we haven't seen in lots of places already. 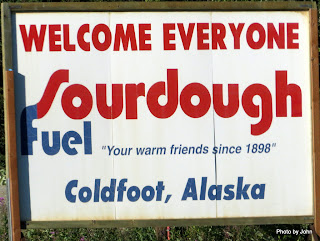 Coldfoot, hiding a little ways east of the highway behind tree cover was the next available fuel (also $5.20) located one hundred nineteen miles past the Yukon River Bridge.

There was also a very nice Arctic Visitor Center here on the opposite side of the road.

There is about 20 miles of very new asphalt north of Coldfoot past Wiseman. 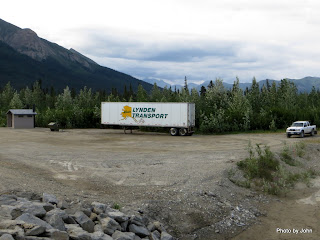 After 8 hours of driving, (I left Fairbanks at 1 p.m.) home for the night was a wayside rest area 30 miles north of Coldfoot. It featured  a nearly new tandem outhouse complete with stainless steel toilet seats. Drivers would be advised to carry their own insulation for winter use!