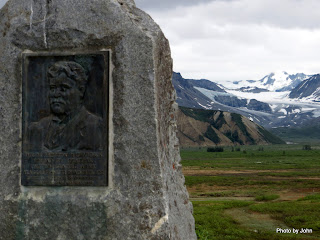 We drove north on the Richardson Highway yesterday. This is one of the oldest highways in the state. The monument is recognition of Brigadier General Wilds Preston Richardson who is recognized as Alaska's pioneer road builder. 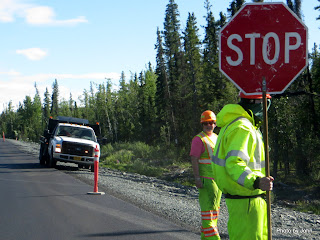 The road, like all Alaskan roads, is under constant maintenance. This eleven miles of new asphalt was greeted joyously - other sections south of it were deserving of similar treatment. 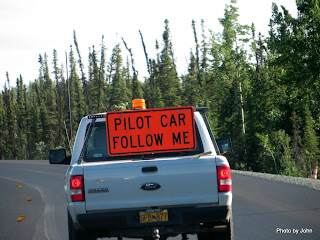 We decided the flagmen and follow car was a "keep them employed" project. The follow car brought zero vehicles southbound and started northbound with just us after a chat with the flagman. I didn't see anything that suggested traffic couldn't run safely both directions without help. 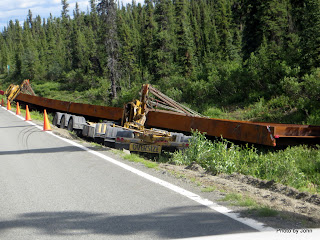 Somebody had a bad day, leaving an over-length bridge girder in the ditch as we approached Paxton. It's going to take some full-sized equipment to get it righted and back on the wheels without damaging the beam. 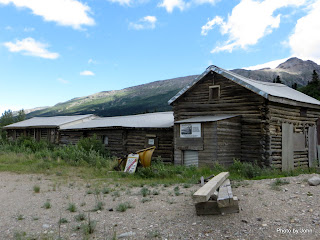 Because of the age of the trail and then the road, there are a couple very old roadhouses. The Black Rapids roadhouse was built in 1902 and the original is now slowly being restored while operations continue in a newer building up the hill. 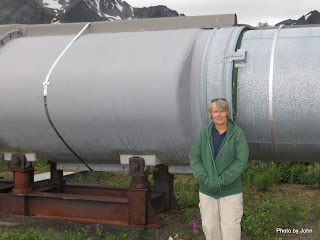 The pipeline essentially parallels the highway much of the way from Glennallen to Delta Junction. 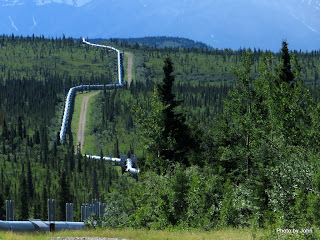 Sometimes it is buried, but other times it creates an interesting zig-zag line across the landscape. 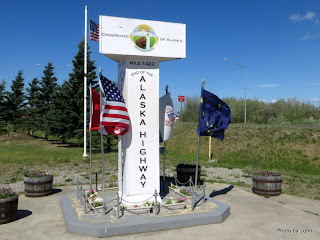 In Delta Junction, the quilt shop is located just south of the Visitor Center so getting to the official end of the Alaska Highway took an extra stop. It's only taken us 43 days to get here from Dawson Creek, but we eventually found the other end of the highway. 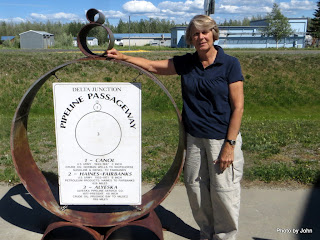 We found this pipeline size comparison interesting. The top 3" pipe is the size the US Army installed along the Canol road during WWII. The 8 inch pipe was run by the US Army from Haines to Fairbanks in 1955 for fuels and used for less than 20 years. The 48 inch pipe runs 769 miles from Prudhoe Bay to Valdez and has operated since 1977. 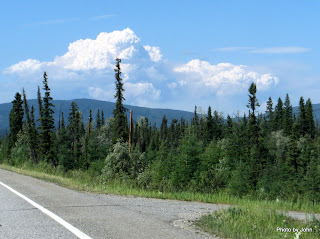 Home for the night was the Harding Lake State Recreation Area about 45 miles southeast of Fairbanks where we could see the smoke rising from the Stuart Creek fire about 25 miles north of us.
Posted by Just Finding Our Way at 1:00 PM