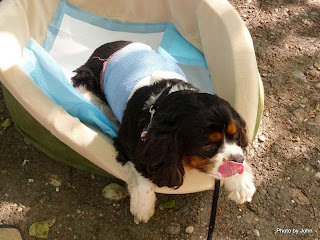 Regular readers know that our Turk was attacked by a Bullmastiff while BJ was at the Chena River State Recreation Area Campground in Fairbanks on the evening of July 2nd.  The vet at the emergency clinic did surgery to repair five broken ribs, a punctured lung, and a flail chest wound and kept him overnight before returning him with instructions to follow up with a regular vet on Friday following the holiday. 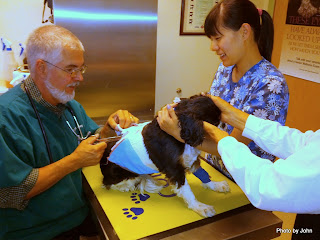 The regular Fairbanks vet checked his wound and confirmed his medication and care regiment, removed his drain tube and his IV port, and agreed to see him again on Monday morning before we left town. With his approval on Monday we rolled south. 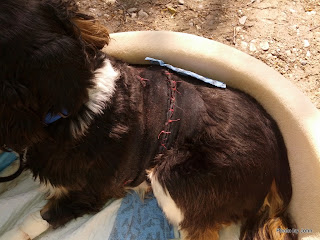 We continued to experience episodes of significant serum seepage from the incision although a phone consultation with yet another vet concurred that this was normal and that we should leave the incision exposed to the air to facilitate healing. 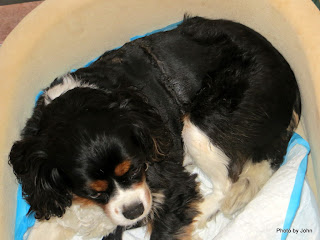 Yesterday morning we had an appointment with the vet our son uses in Eagle River and went through our concerns with continued episodes of serum leakage, typically from one of three places along the incision. After a close inspection, the vet removed all the stitches and we took Turk back to the trailer with a smile on our face. 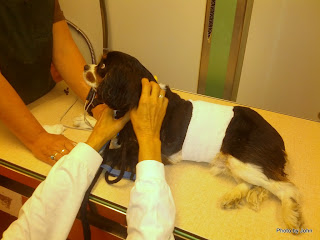 Within a couple hours, Turk once again expelled serum from the center of the incision, followed by the realization that I could hear him breathing through the small gap in his incision, aka a sucking chest wound. A phone call to the vet led to chest x-rays where it was obvious that his left lung was collapsed although his pulse ox was reasonably good. 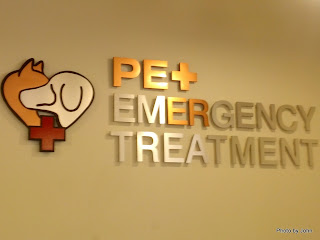 Consultation suggested our best option was to transfer him to Pet Emergency Treatment in Anchorage where they put him in an oxygen cage and arranged a consult with a thoracic specialist, followed by a surgery to figure out what wasn't holding and healing. 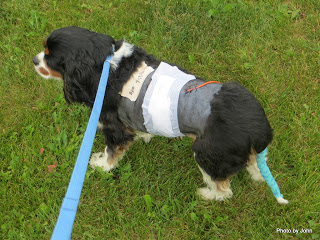 This morning we went back to visit him and were able to take him for a walk outside although he was still a bit groggy.  The surgeon trimmed some rib ends that weren't healing, flushed his chest, and did some new internal stitches to replace those that had been originally placed in tissue that then died - apparently common in dog bite cases. 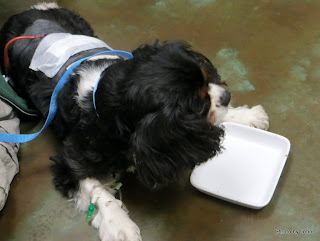 He'll be staying at the hospital until they confirm the lung is fully inflated, that drainage is within normal parameters, and remove his chest tap - likely a couple more days. They're pleased with how he's responding - he even cleaned up his plate!

7/17 - Turk continues to improve but they want to hold him in the hospital until Friday afternoon. Given that, BJ is going to stay in Eagle River and I'm going to take the truck for a long but quick trip to McCarthy. Should be back by noon on Friday. Don't expect any blog updates until Saturday :-)

Posted by Just Finding Our Way at 3:13 PM