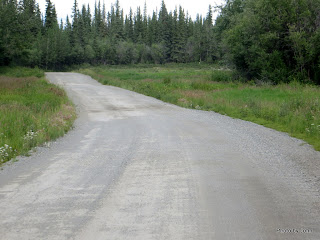 With Turk expected to remain in the hospital until Saturday, but improving daily, I made a quick solo trip to the McCarthy / Kennicott area. Access to the Edgerton Highway is available from the Richardson Highway in two places. The northern point puts you on the old Edgerton Highway alignment - a good gravel road, until you meet up with the real thing in 7 miles at Kenny Lake. 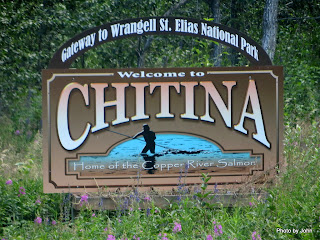 From Kenny Lake it's 26 miles of classic Alaskan two lane asphalt, complete with the requisite frost heaves and views, to the town of Chitina. I spotted mother moose with a calf on the way but they didn't hold still for a picture. 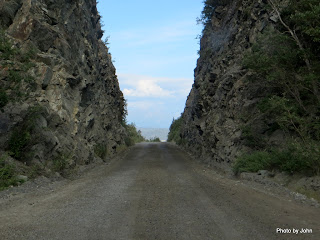 The 60 mile gravel road to McCarthy starts on the outskirts of Chitina (about 2 blocks from the center of town) with the narrowest part of the whole road. Most of the McCarthy road was built on top of the old Copper River & Northwestern Railway right of way, thus the narrow cut here. 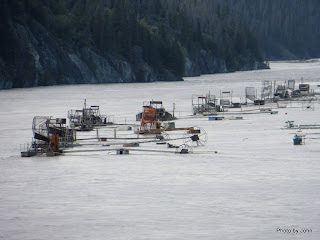 Within a couple miles of Chitina the road crosses the Copper River where there were a number of fishwheels in operation. 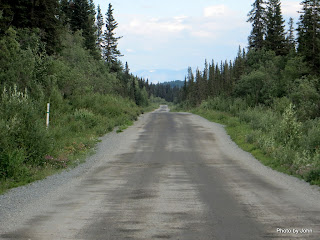 The road was certainly passable by any motor vehicle, but was narrower and not as well maintained as the Dalton. It had been oiled in places but clearly hadn't seen a grader this year with more washboarding and chuckholes than I experienced on the Dalton. 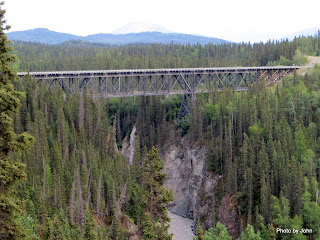 The highlight of the road was the Kuskulana Bridge. It was built in 1910 for the railroad with the roadbed 238 feet above the river. 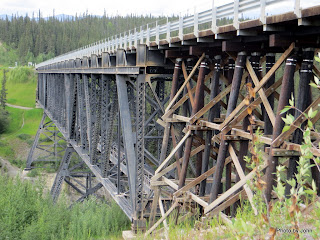 I couldn't resist the view from a different angle. 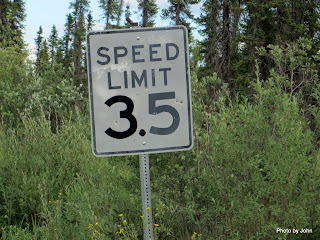 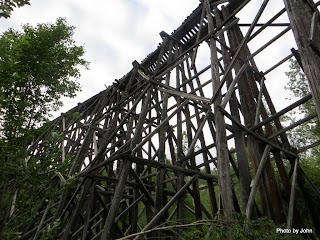 The other piece of engineering that attracted me was the Gilahina Trestle. It was over 800 ft long and 90 high, incorporating over 500,000 board feet of lumber in its construction. It was built in just 8 days, in January 1911 and is just one of the over 270 trestles used on the 170 mile route. It's now showing the impacts of wood rot and gravity. 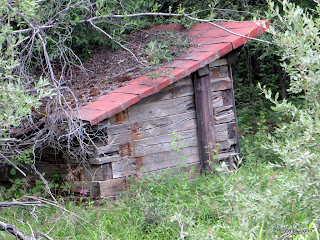 The land along the route varies between National Park land and private land with quite a few private homes or cabins scattered along the way. This building may have been associated with the railroad which shut down in 1938 when the Kennecott* mine closed. 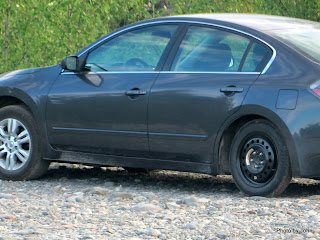 At the end of the road, at least for visitors rather than residents, is a parking lot ($5 per calendar day or $20 per night for camping) and a foot bridge to the town of McCarthy. Much is made about the rough road and the need for full-sized spares, but this car in the parking lot didn't seem to read that note.

Next up - McCarthy, with Kennicott / Kennecott to follow.
Posted by Just Finding Our Way at 10:10 PM