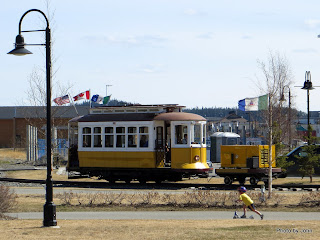 We were quite impressed with Whitehorse. They’ve developed a nice walking path along the river, and an electric trolley that runs nearly the same route. 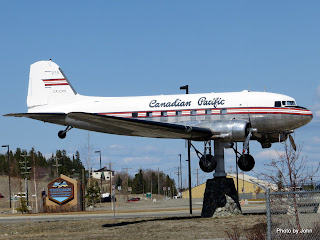 They have a weekly farmer’s market that we managed to catch and lots of museums including the Transportation Museum near the airport, complete with a DC-3 “windsock.”

Speaking of airports, they had a Nippon Cargo Airlines 747 sitting on the ramp – local word was an emergency landing on a flight from New York to Anchorage on their way to Japan. 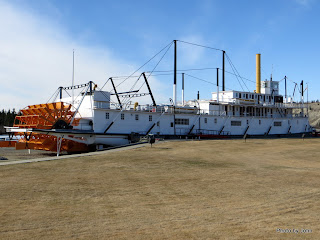 We walked around the Klondike – a paddlewheel steamer that used to operate on the river here – but didn’t visit any of the several museums. We’ve already decided that a return is required. We stopped by the Visitor’s Centre but their Wi-Fi was time limited and much slower than Mickey D’s. 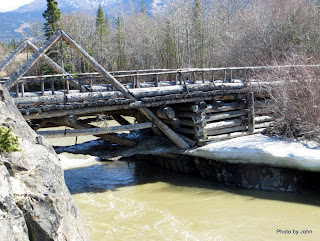 East of Haines Junction we stopped by Canyon Creek to see the restored bridge. It’s not used for traffic, but was used as part of the original alignment of the Alaska Highway. 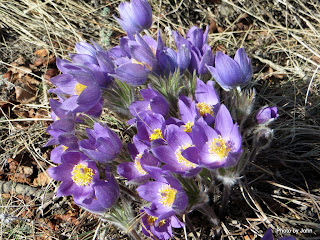 Even though there was still snow under the bridge, the flowers were blooming. In Haines Junction, gas was selling for $1.59 a liter. 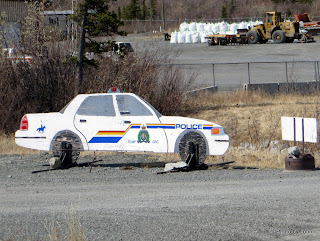 The plywood police were sitting by the roadside approaching Destruction Bay where fuel was priced at $1.60 per liter. They say it was named for the results of a storm, but if you drive too fast on the frost heaves, it could apply to your vehicle as well. It will be slower going from here to the border. 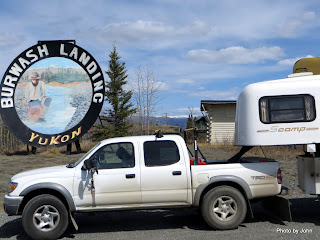 We stopped by Burwash Landing long enough to take a picture of the world’s largest gold pan but didn’t check their prices. 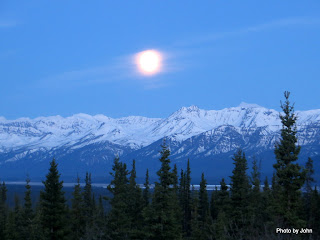 Home for the night was a turnout 1094 miles from Dawson Creek with a beautiful view of the St. Elias range from our back porch (even with a full moon at 4:30 a.m.) The day was a two bear, two moose day.

Posted by Just Finding Our Way at 1:41 PM