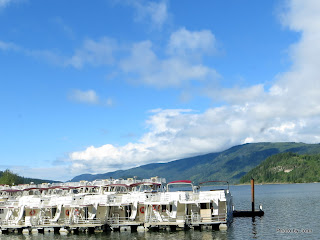 We left Kelowna at 7 a.m. with blue skies showing through broken clouds. The first section of the day was along rivers or lakes 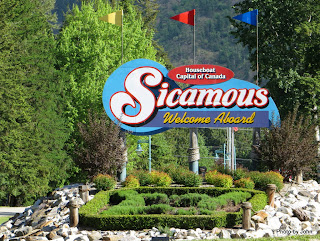 until we reached Sicamous which claimed to be the Houseboat Capital of Canada. 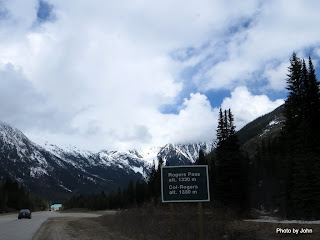 The climb to Rogers Pass (and descent) was mostly gentle grades but there were major stretches where the paving was breaking up or they were experiencing problems with shifting soils resulting in lots of bumps along the way. 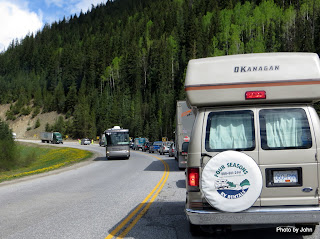 We only experienced one construction delay for several minutes, but passed several areas where the speed limit was reduced for construction and temporary signage said there would be a flagman but neither construction nor the flagger presented themselves. 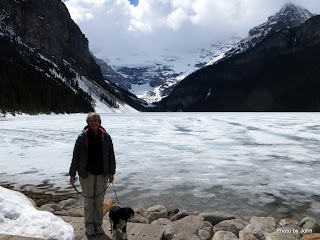 We stopped at Lake Louise in recognition of our visit there just short of 43 years ago. As expected, it was still sort of frozen. Someday I’d like to paddle this lake. 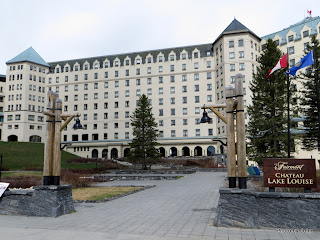 Chateau Lake Louise didn’t seem as fancy as I recalled, but it was just as imposing as I remembered. 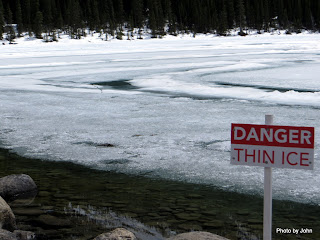 At approximately 5000 ft elevation, the night would be the coldest of the trip so far with overnight temps slightly below freezing. With the road between Lake Louise and Jasper included in one of two National Parks, boondocking legally is tough.  We bought a one day permit to transit the National Parks ($19.60 for vehicle +2 people) that is actually good until 4 p.m. on the 17th.  Our site at Lake Louise Trailer Campground with electric cost $32.30. The free hot showers (in a solar tempered building) were just across the road and there was a six lane dump station on our way out.
Posted by Just Finding Our Way at 4:52 PM