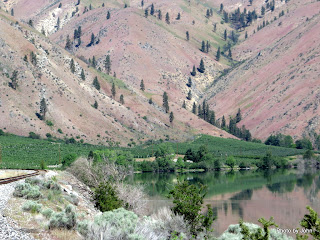 We started out the day by driving a portion of the Cascade Loop traveling north on Highway 97 through orchards and vineyards along a portion of the Columbia river and then other rivers that were running near flood stage but without any impact to the road. 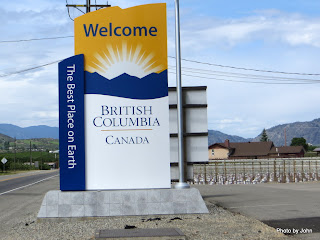 We crossed the border at Osoyoos. The wait was about 5 minutes, the process took about 2 minutes.  Where are you from? Do you know the license number of the truck you are driving? Do you have any firearms or pepper spray? How long will you be in Canada? How much alcohol do you have? Simple questions with simple answers. He didn’t ask about proof of insurance nor anything about the dog who watched him carefully during the whole conversation. He did ask if our Scamp “expanded” to which we answered no although several other responses rolled around in my mind. 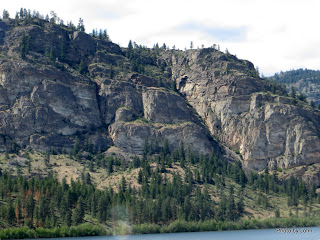 The Canadian Okanogan is similar to the area south of the border but the hills have much more exposed rock, and the roadside had a proliferation of very nice looking fruit stands which were all still closed. Later in the year I expect they could be enticing.

The town of Oliver, BC claimed to be the wine capital, and from the number of vineyards, the statement could be true.  The downtown was charming and appeared that it would be worth a visit, but we kept rolling north without even a picture.

Our stop for the night was a Walmart Super Center at Kelowna, BC. Although the lot is marked 3 hour parking for customers only, there were six RVs in the corner by morning including us.
Posted by Just Finding Our Way at 4:40 PM