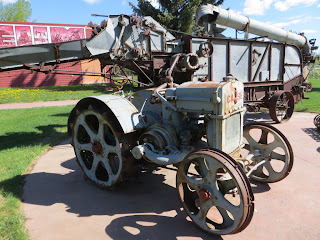 We stayed south of Grande Prairie last night specifically so we wouldn’t get to town before the Grande Prairie Museum opened. It was a grand idea, but in spite of the posted hours, they weren’t open. They did have an old Case and threshing machine out front. 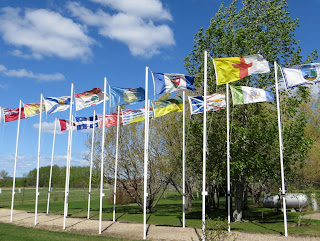 Just down the road on west side of Beaverlodge we were greeted by all the provincial flags at the South Peace Centennial Museum which was open and which we had all to ourselves. 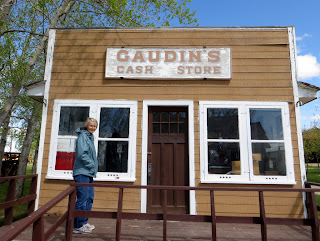 The museum is primarily a collection of buildings that have been moved on site along with a large collection of vintage agricultural equipment.  In addition to the very obvious grain elevator, they had a variety of homes, shops, and schools – all of which were open so that you could go in and view the displays. 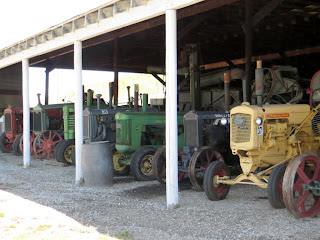 They had sheds full of tractors, threshing machines, and other agricultural implements, most of which appeared to be in operating condition. 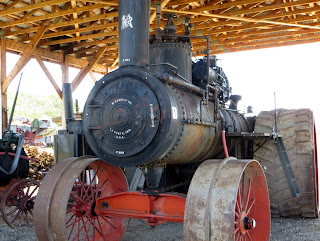 I counted at least 8 steam engines including this Rumley that had a shed to itself. It was positioned such that it may have been used to power the sawmill on occasion. 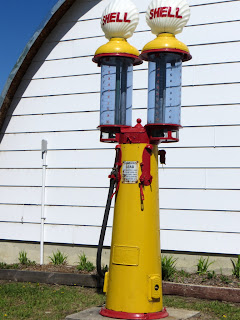 Outside of the auto and truck building was the only double headed gas pump I’ve ever seen.

Entrance to the museum was $5 per person with a very large grass parking lot. They have a couple special events each summer, one related to horse power (the four legged kind) and the other related to steam.

Wi-Fi to post this update was complements of the Visitor's Centre in Fort Nelson, BC.
Posted by Just Finding Our Way at 2:46 PM