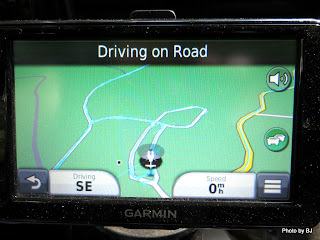 Sometimes Suzy (our GPS) is not terribly expressive. On Wednesday morning, she led us north on some twisty farm roads including several miles of good gravel north of Drakes Crossing before picking up I-205 around the east side of Portland. With nice weather and time, why not see where she's leading? 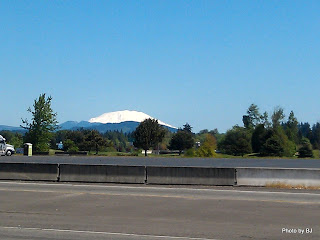 Slowly but surely, we moved into areas where we recognized the names, but the trees and brush had grown enough that we had a tough time recognizing landmarks at times. The mountains (Hood, St. Helens, Rainer) were out in all their glory, but all we have is BJ's cell phone picture to show for it. 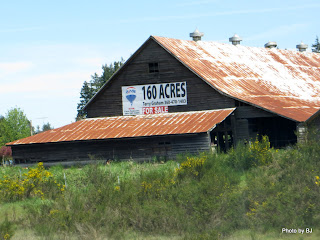 The rusty and tired barns we spotted today were different - they had For Sale signs on them!

We found the house that BJ grew up in right where she left it, but somehow missed the grade school she attended. We found where the high school hangout drive-in had moved but didn't think much of their diabolical parking lot. While it might be effective at keeping cars from racing through the parking lot, it wasn't very trailer friendly. The burgers and onion rings were just as good as ancient memories recalled.

We're spending time driveway surfing with her family in the Olympia area for a couple days before continuing our trek.
Posted by Just Finding Our Way at 3:00 PM