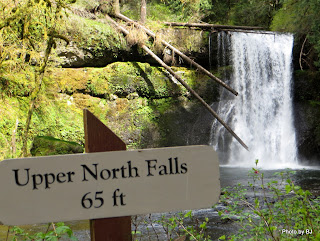 We cheated, and broke this into two days. On Monday afternoon we did a short hike to Upper North Falls 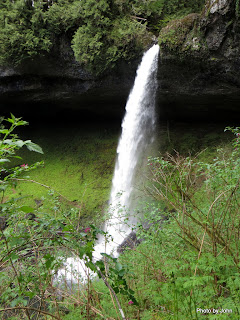 and North Falls. Both of these were easy to access although there were 77 stairs on the trail to North Falls.

The ten falls that make up the 8.7 mile "Trail of Ten Falls" are primarily on two separate creeks with all of the "North" falls plus Drake Falls being on the North Fork of Silver Creek. Twin Falls is on Hult Creek and Winter Falls is on Winter Creek slightly upstream from their confluences with the North Fork.

The South Falls are both on the South Fork of Silver Creek. The confluence of the two forks is bypassed by the loop trail. 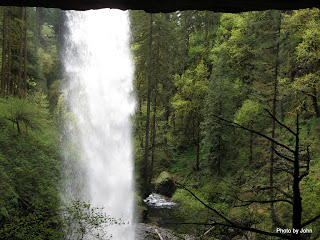 The trail goes behind three of the falls including the 136 foot North Falls. It is little wonder that the trail is designated a National Recreation Trail. 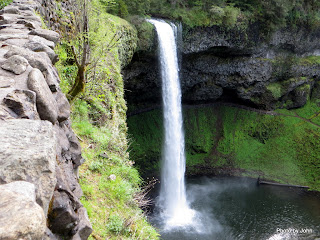 On Tuesday, we started out at South Falls (177 ft.) and did a loop hike. Weather was cool which made for a very nice hike although it was a bit damp where the trail passes behind the falls. Very few people were out - we met perhaps 15 throughout the day. 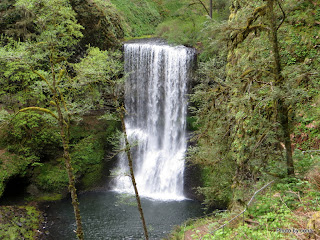 Lower South Falls (93 ft) is about a mile downstream from South Falls. 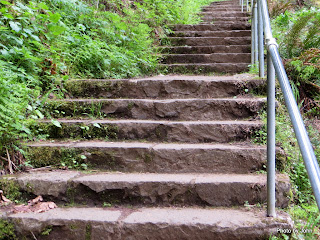 The approach includes 185 steps before traversing behind the falls. 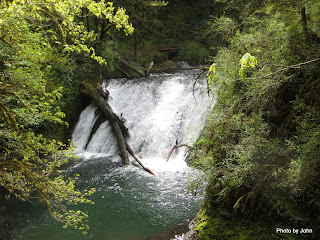 The trail now cut up and over a ridge into the North Fork drainage.

The Lower North Falls is just 30 feet high. For a fairly small creek, it was interesting the amount and size of trees that were hung up in the various falls or in the pools below. 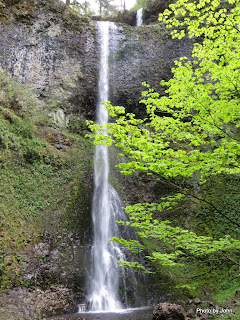 Double Falls was on Hult Creek just a little ways up from the confluence with the North Fork.  At 178 feet, it was challenging to photograph. It's a double drop, with the upper section to the right of the lower section. 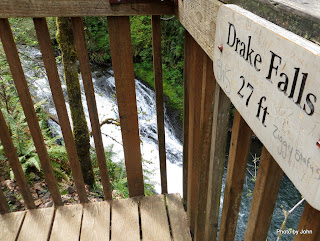 Drake Falls was located at a corner in the canyon and was difficult to see except from a viewing platform cantilevered out over the river.  It is the shortest of the ten falls at 27 feet since they don't include the falls on the smaller feeder streams. 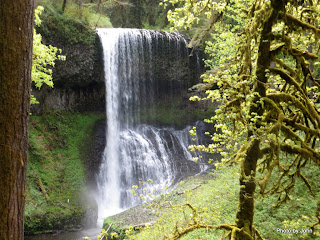 I thought that Middle North Falls (106 ft.) was my favorite.  I liked the clean fall for the top section broken up by the rock on the lower section. 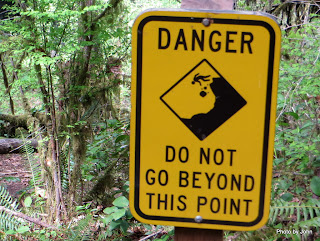 At the top of this fall was a little unofficial stub trail to a wonderful viewpoint directly at the top of the falls. I'm not sure why they positioned two of these signs so that neither could be seen where that stub trail began, but since the signs were there I won't show you the picture I took. 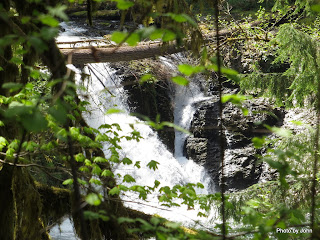 Because of the way we broke up the loop, Twin Falls (31 ft.) was a short spur hike for us.  Perhaps when there is more flow, the twin aspects of the falls would be more equal.  I never did find a spot for a clear view at a good angle. 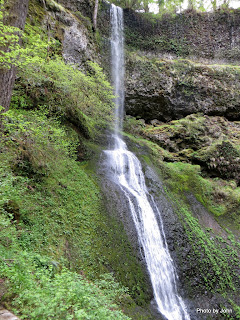 Winter Falls (134 ft.) was the last of the ten for us. Not a lot of water flowing in this drainage, but a very pretty fall. It appears that it picks up additional flow part way down the fall.

From here it was 1.6 miles along the Rim trail back to the truck parked near the South Falls trail head. Depending on which map you reference, this shorter loop is somewhere between 5 and 6 miles.

We should note for those keeping score - 16 days and no rain yet!
Posted by Just Finding Our Way at 4:00 PM