We'll be Coming Around the Mountain 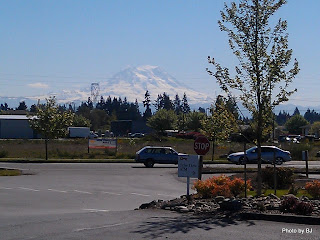 Today was a travel day but since The Mountain was out again for the fourth day in a row, we took the road less traveled. We were headed from Olympia to Ellensburg but decided to go via White Pass in order to get glimpses of Mt. Rainer throughout the day starting with this one from downtown Yelm. 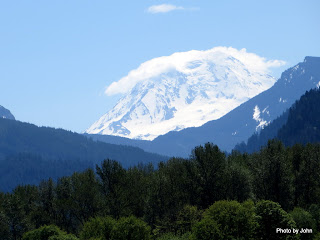 Mt. Rainer wasn't the only mountain showing off. Both Adams and St. Helens were out as well, 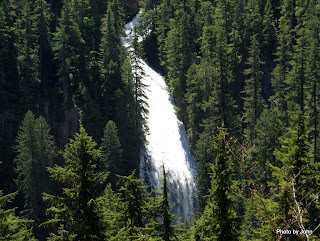 and the waterfalls were flowing nicely. Don't know what this one on the other side of the valley was called, but it was huge - couldn't see the bottom. 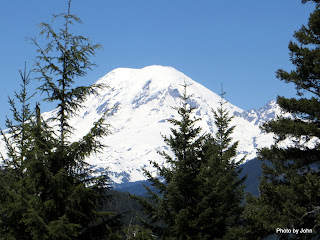 The best Rainer view was from the southeast side as we approached the top of White Pass. 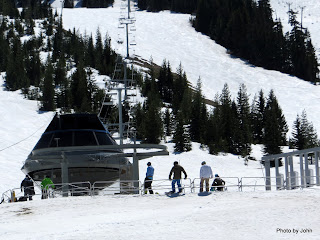 A few people were still skiing at the summit of the pass but snow was getting thin, unlike the ice on the Yukon river at Eagle, Alaska which was reported to be 48" thick on the first of May. We're hoping it melts before we get to Dawson City! 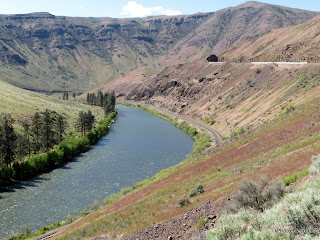 To finish off the day, we drove the old road through the Yakima River Canyon between Yakima and Ellensburg. Not as steep, much less traffic, and prettier - trumps faster every time.

Posted by Just Finding Our Way at 7:05 PM