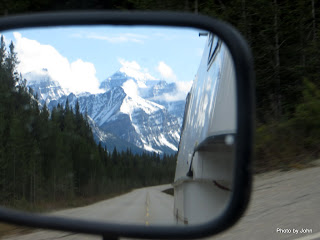 We put Lake Louise and some blue sky in our rear view mirror about 8:15 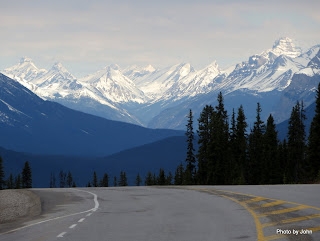 And headed north on the Icefields Parkway into skys obscured with a high overcast. The forecast called for frozen mix but the roads were clear and dry. (Sometimes you have to stand in the middle of the road to get the picture you want!) 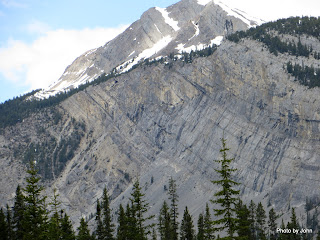 As we traveled north we started seeing some massive rock walls, including this one with interesting texture. 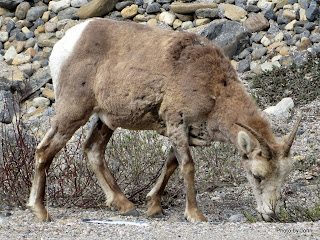 We saw our first wildlife of the day 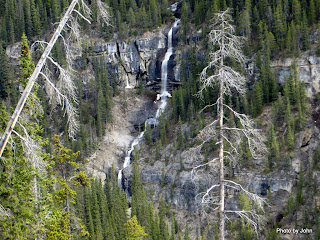 just before the Bridal Veil Falls viewpoint where only the lower half of the Falls made it in the picture. 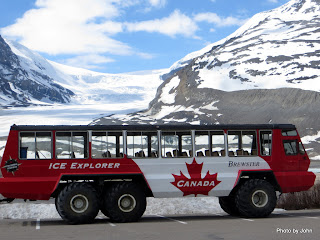 We stopped at the Icefields Centre to gaze at the glaciers but did not partake of the available bus ride on the glacier. 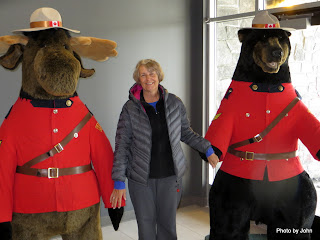 BJ did make friends with the stuffed Mountie mascots. 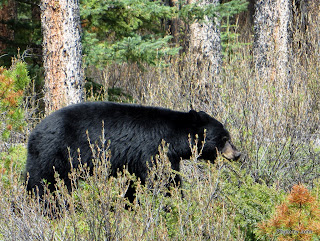 We enjoyed a few minutes watching a black bear foraging near the road (speaking of road - long sections that looked nice but felt like driving on railroad ties, other long sections with frost heaves) 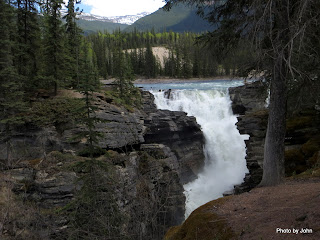 before stopping to view Athabasca Falls where the river drops into a VERY narrow gorge. The river, which started at the glaciers, flows to the Artic ocean.

Home for the night is the Parks West Mall in Hinton, Alberta. They host Safeway, Walmart, and Canadian Tire stores as well as the shops in the mall and post signs welcoming RVs to stay overnight. Their free and fast wireless supported posting the most recent posts.
Posted by Just Finding Our Way at 5:10 PM