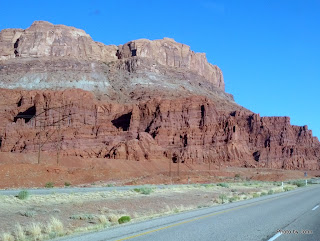 With the exception of the first 40 miles or so, this was all new country to us. We had to take a picture of the Moab red rock as a teaser for the Green River Gang on our way out of town, and we kept looking for the road to Ruby Ranch but without success. 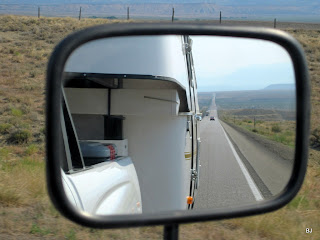 Today’s jaunt was 318 miles and had some sections between Green River (Utah) and Price, UT that were quite straight, at least from a compass perspective. The same wasn’t true from an altimeter perspective! The day was full of ups and downs, with more ups than downs. Over all we gained a couple thousand feet from Moab but it took a lot of work to do it! 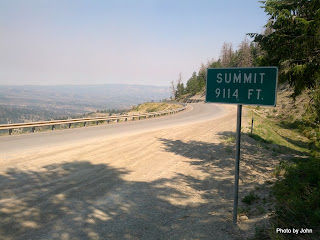 The first pass, between Helper and Duchesne was 9,114 feet. The section between Helper and the summit was stunningly beautiful, making the climb worthwhile. Sure glad we added the transmission oil cooler! Right at the summit they had signs out about “fire operations” in the area and the smoke had been getting continually worse. There were several scattered fires near the road on the east side of the pass. 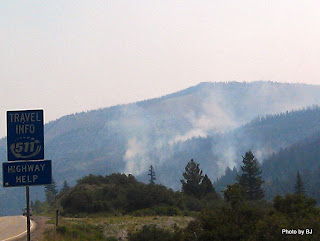 Lots of old ranches (log buildings) in the bottom land between the fires and Duchesne, some of which were still operating along with oil wells scattered all down the valley. It was primarily Irrigated farming, mostly hay, between Duchesne and Vernal. 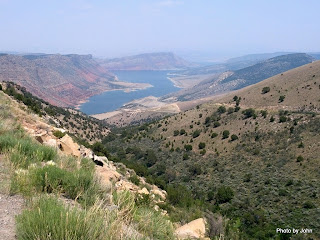 From Vernal it was up and over another pass, this one “only” 8,458 feet, before our first view of the Flaming Gorge Reservoir. Just past Manila (no, not that one!) we entered Wyoming. 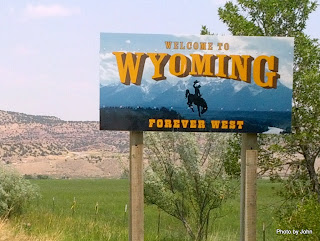 Camp for the night is Buckboard Crossing, chosen for the power (30 & 50 amp) available at many of the sites. It’s 98 degrees at 5 p.m., but should cool down to the mid 50s by morning. This location is a marina on the reservoir but we’re not seeing much traffic and the campground is mostly empty. There’s no shade, but there are showers, very clean restrooms, water at a couple locations, and a dump station. $22 for power sites unless you’re fortunate enough to have someone with a Senior Access pass which drops the cost to $13.
Posted by Just Finding Our Way at 5:42 PM