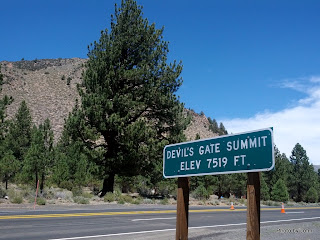 We crossed several passes passes today including some that weren't indicated on the map, starting with a pretty steep up & down between last night's camp and the big town of Susanville. The tallest one for the day was Devil's Gate Summit on 395 but that won't hold a candle to Tioga Pass tomorrow. The nice thing is, we won't be towing the trailer tomorrow. 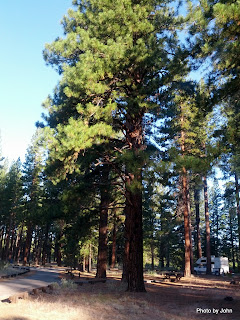 Last night's camp turned out to be a nice quiet place, once we got there. The road in from the north was quite narrow and twisted in every direction possible. The campground was a Forest Service facility that accepts reservations, but was only about 25% full. Most sites were back-in, and for reasons I couldn't figure out, well over half of the sites were angled the wrong direction to facilitate backing in. The restrooms looked like pit toilets from the outside but actually had running water and tile on the floor and walls. Cost without the senior discount was $20 which seemed over-priced. Verizon 3G was available but very, very weak. It was located directly on Eagle Lake which might be a redeeming factor for a boater. 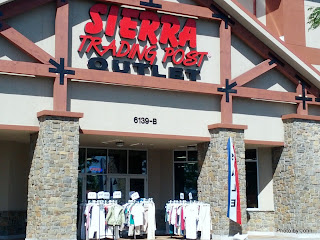 We stopped at the Sierra Trading Post Outlet in Reno, complements of a sign along the road. We've used their online and mail-order in the past but this was our first visit to their store.  It was fun to wander through but they didn't convince us to buy much. BJ found a super deal on a pair of hiking pants, and I found something for the Green River trip in September but I can't disclose what it is. 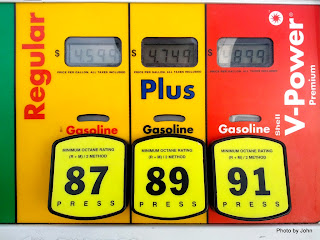 We'd fueled in Carson City, Nevada thinking prices would be better than California prices. We just didn't realize how much better nor did we have a tank big enough for all the running around we want to do in this area. Now I'll admit that this section of 395 isn't the most highly traveled, but it was a bit shocking to see regular advertised for $4.99/gallon. We got the best deal in Lee Vining where the three stations varied by 40 cents/gallon between the Chevron & Shell stations with Mobil taking the position smack dab in the middle at $4.79! 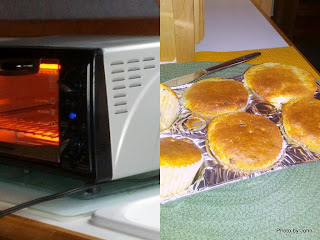 Since we have full hookups for the next couple days, BJ decided to make muffins in the toaster oven that we haul for such relatively rare occasions. In order to pre-heat it, she read the instruction manual, fiddled with the knobs, and then decided that it needed to be plugged in for it to work. We've been cooking with gas too long apparently.

I'm very pleased to report that the muffins were great and she hasn't read this post yet!
Posted by Just Finding Our Way at 8:46 PM