Yesterday we talked about the possibility of hiking somewhere or paddling the western shore of West Thumb today, but the rain that started yesterday afternoon continued much of the evening and left a heavy overcast this morning. To top it off, BJ woke up feeling pretty marginal so we decided to backtrack and do some more windshield time.

We started off by backtracking to the John D. Rockefeller, Jr. Memorial Parkway. This area is managed by the National Park Service and is sandwiched between Yellowstone National Park to the north and Grand Teton National Park to the south. Within the Parkway are 20 primitive campsites scattered in 8 locations along Grassy Lake Road.  We checked out the first four locations (10 sites.) Each has views and access to the Snake River. The fourth location was a bit iffy with the possibility that you would not be able to turn around once you got in there. I really liked the second and third locations but BJ noted there would be a possibility of mosquitos. I thought there would be a good possibility of morning and evening animal sightings. All of these sites are free and there is a modern pit toilet at each location. 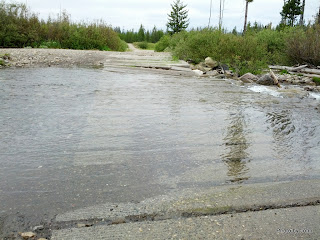 The Visitor Center suggested the National Forest operated Sheffield Creek Campground with 8 primitive sites as another option. It’s south of the bridge over the Snake River which is just south of the Visitor Center, on a narrow gravel road east of the highway. It does require fording the Sheffield Creek which could be problematic during periods of heavy snow melt. The ford has concrete planks, but there has been some shifting and settling on the west side, making clearance an issue for some trailers. None of the sites were special, but the $5 pricing (half off if you have the “pretty card”) payable at the iron ranger may make the location attractive. 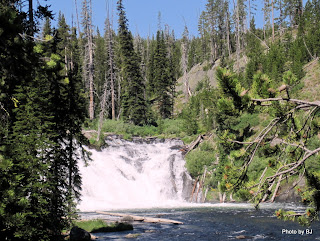 Returning north, we stopped at the Lewis River Falls since there was some available parking, unlike when we entered Yellowstone on Wednesday. We were going to check out a short section of the Riddle Lake trail, but it was closed for bear management until July 14th. The “Bear Management” program is to keep people out of preferred bear habitat until later in the season to minimize human disruption.

There was a traffic jam just north of the West Thumb / Old Faithful intersection with at least four rangers directing traffic. It was a beautiful bull elk but no chance to get a picture. 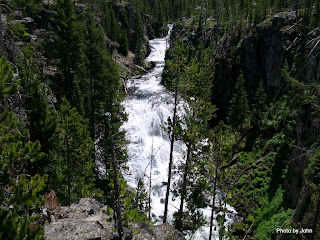 We did stop at Kepler Cascades today after passing the parking area multiple times in the last three days. Couldn’t get all of it in the frame, but did manage to get the top half.
Posted by Just Finding Our Way at 7:23 AM