We woke to severe storm warnings for the area east of Spokane but we were planning to head west eventually so we slid by that issue. Breakfast with my sister & brother-in-law was followed by a trailer tour (how long does it take to “tour” a Scamp?) which featured an inspection of the folding ladder. We stopped by the bride & groom’s apartment and joined them and close family while they opened their wedding gifts. 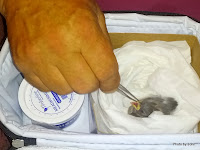 No pictures of the wedding gift opening, but we do have pictures of Moses’ 11 a.m. feeding. Moses was a featured guest at the all of wedding festivities. See Ellen’s post from July 12th to figure out where Moses joined the party.

About noon, we loaded Mom’s suitcase and stuff and headed west with her following the scenic Highway 2 route to Wenatchee. About 40 miles out of town, BJ realized we left some of Mom's stuff behind so we got to see some of the country again while my brother helped by meeting us halfway in the big town of Reardon. With that out of the way we continued west, watching the status of the crops along the way and listening to stories. 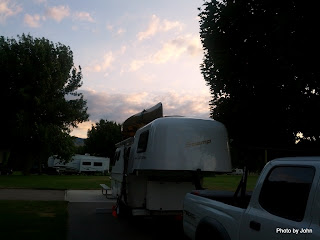 I had expected Wenatchee to be our hottest overnight location and made reservations (expensive, I might add) at Wenatchee Confluence State Park so we would have power for the air conditioner.  After contending with significant breeze for the last 100 miles (a headwind, of course), we arrived in Wenatchee to weather that was nearly chilly, especially after the daytime temps we’ve been experienced.  Mom’s home, we’re settled in, and the storm clouds are gathering.

By the time you pay the out-of-state surcharge, sales tax, and reservation service fees on top of the stated use fee, this location is the most expensive overnight ($47.50) on the trip except for the commercial park in downtown Moab which cost 81 cents more.  To add insult to injury, the showers require a $1 token for 3 minutes.  The flip side is that the location is good, and we’ll have clean tanks when we head south tomorrow morning.

Posted by Just Finding Our Way at 9:30 AM