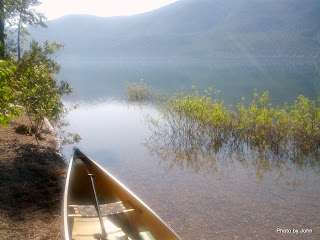 It wasn’t an early start but early enough that there was still mist on the lake and the water was glassy smooth. Spencer and I launched from the Fish Creek picnic area and paddled up the northern shore of the lake for a couple miles. I have a short paddle for him, but forgot to bring it, but he did quite well with my favorite. 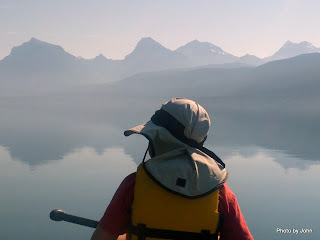 We had a chance to watch a bald eagle in a snag near the shore for quite a while, hoping that it would spot a fish, but he never moved while we were there. Tried to get a picture but didn’t get anything decent enough to share. 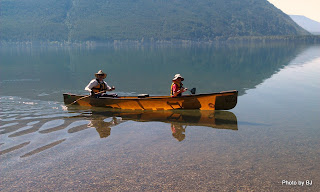 I was really pleased to watch Spencer figure out hand positions on the paddle and paddle well on both sides. All in all we had a great time for a couple hours on the lake. 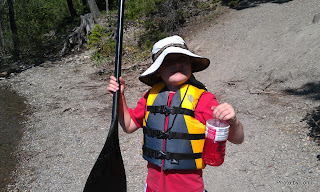 BJ was at the beach when we came back and got a picture of the intrepid paddler with his gear.

We spent a couple hours this afternoon at the Discovery Cabin at Apgar. He spent time there yesterday as well. The cabin is full of hands on exhibits especially for young people. While we were there this afternoon, a ranger was giving a talk about animals pelts that was quite interesting.


On a totally different subject, Nina & Paul of “Wheeling It” are volunteering as guides at the lighthouse in Bandon, Oregon.  She’s writing a three part series on RV-based volunteering, and the first two posts have been really good.  You can check them out at Wheeling It.
Posted by Just Finding Our Way at 11:07 AM