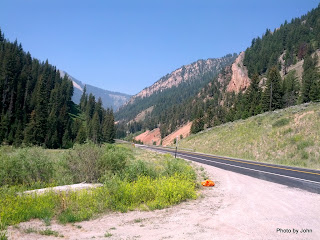 We hit the road earlier than normal today to the sound of hammered dulcimer and fiddle hymns from a CD I picked up in the Great Smokies.  The destination was Grand Teton where reservations aren’t available except in their $65 full hookup RV sites.  With that in mind, we wanted to get in reasonably early but didn’t push.  From Green River, Wyoming north to Boulder we traveled rolling hills with petroleum activity on one side, and occasional signs of the Big Sandy river on the other side.  After Pinedale we followed the Hoback river to the west. 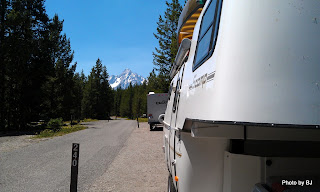 We arrived at the Colter Bay Campground check-in in Grand Teton NP at 1 p.m. where we were assigned a site based on our size.  Looks like most of the sites are parallel parking style with a handful of pull-throughs that give an extra 5 or 6 feet from the road.  Roads in the campground are one way, and our site is on the wrong side of the road so the door opens towards the road.  I wanted to do a u-turn but didn’t have enough space.  At $10.25 per night with the "pretty card" (as the gal at check-in called it!) we can’t complain.  Our loop is a “no generator” loop and the quiet is nice! 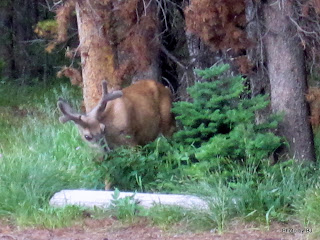 We spotted lots of antelope (but no deer) playing on the way here, and have seen bison, antelope, and grizzly as we drove through the park as well as a buck in velvet just across the road from our trailer.

Getting a permit for the canoe was interesting.  I knew from research that they should be $10 for 7 days and usable in both Grand Teton and Yellowstone.  We inquired at the visitor center at Colter Bay where we were told we would also need a $15 Wyoming permit for invasive species – something that hadn’t been mentioned anywhere.  Since we were driving to Jenny Lake, I inquired again at the visitor center where it was $10 for the permit and I needed to sign a free document to put on the dashboard of the truck stating that I certified the boat was free of invasive species.  Given the amount of time it’s been hanging in the garage, that wasn’t a difficult thing to do!
Posted by Just Finding Our Way at 12:22 PM