We pulled out of Grant Village in Yellowstone early this morning in hopes of more animals sightings on our way out the west entrance of the park.  A couple cow elk, a bunch of bison, and several pronghorn were the total for the day – the pronghorn were in rangeland along the Madison River well outside of the park.

Most of the day was spent in rolling hills with a stream, creek, brook, or river in the bottom of the valley.  While the waterways changed names throughout the day, the presence of water was a constant that BJ commented about.  Lots of dories with fly fishermen, especially the first 90 miles or so. 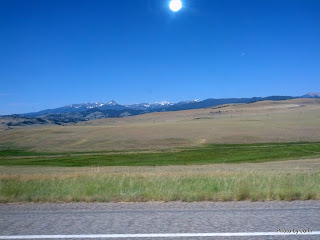 The hills and valleys constantly changed character, sometime wooded, sometimes rangeland, and sometimes irrigated agriculture, primarily hay.  The weather remained beautiful all day, with occasional white fluffies to contrast with the blue sky.  So much nicer than the smoke that prevailed on the first three days of the trip.

We did join the freeway crowd for a couple hours this morning, but even that wasn’t busy.  In fact, the busiest section of road was US200 with a lot of what appears to be Flathead Lake and Glacier NP departures. 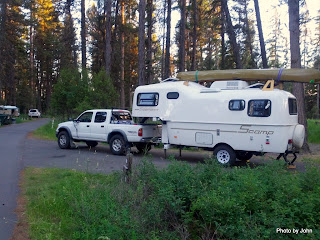 We’re settled in for the evening at the Big Larch Forest Service campground on Seeley Lake, about 80 miles or so south of Kalispell. Modern pit toilets and potable water are available.  Cost was $5 with the “pretty card.” Flat space makes it easy to stay hooked up.  One to two bars of Verizon 3G for phone connectivity which just increases the desire for a Millenicom 3G/4G hotspot.

Two spaces down is a 16’ Scamp that pulled in about 15 minutes before us.  They’re from Oregon and took their Scamp to Alaska last year.

Tomorrow, we’ll pick up one or two people at the Kalispell airport.  We’re expecting Spencer for several days, and Carleta may stay overnight if she can’t get a flight back out to Seattle.
Posted by Just Finding Our Way at 10:11 AM