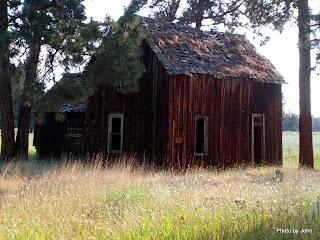 Another long drive today, but before we got started we had to stop near Diana’s place to take a picture of a former stage stop. While taking the picture, I spooked three doe that were feeding in the tall grass near the buildings. A bit later, just south of Bend, we had three buck decide to cross the road right in front of us. 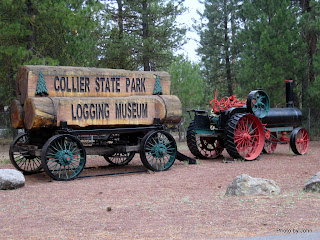 Much of the drive was through Ponderosa Pine country, with a lot of beautiful specimens near the road. I intended to push through, since it was going to be another 300 mile plus day, but serendipity got in the way. We spotted the sign for Oregon’s Collier State Park Logging Museum and had to stop. 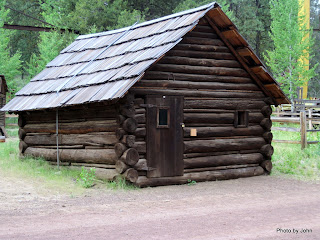 In addition to all the logging equipment, they had also collected a number of log cabins. While the workmanship and chinking style of each varied, and they had been collected from a relatively wide area, it was surprising how consistent they were in size, varying only by a foot or two either direction. 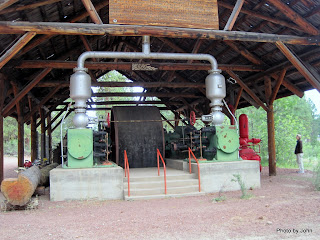 They had a fairly extensive collection of steam tractors and a VERY large steam engine that had powered the Long-Bell mill in Weed, CA. from 1917 through 1964. This 2000 hp engine had a 6’ wide, 3 ply drive belt that required 639 cowhides to construct! 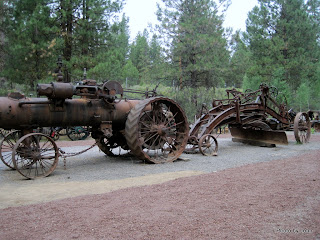 The collection also included a number of graders including this Austin “Rip Snorter” (loved the name), a wide variety of early bulldozers, and some very rare rail mounted equipment. 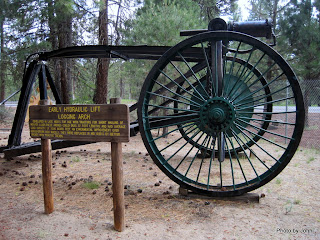 They had a number of large wheel logging arches, some with wooden spoke wheels, and this later version that used a hydraulic lift. 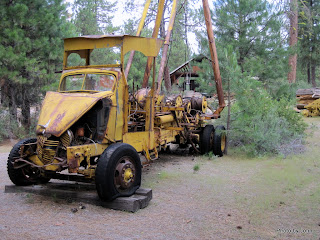 There were a couple WWI era Bulldog Macks, and then some mid-century equipment as well. I especially liked this early yarder, complete with a 1938 Ford grill and a Ford flathead engine.

Apparently, Father’s Day is the time to be there since had have a number of the units operating that day. In some ways, the best part of the stop was talking with one of the park volunteers who gave me the business card for the Park Ranger/Museum Curator who also organizes their volunteer staff. 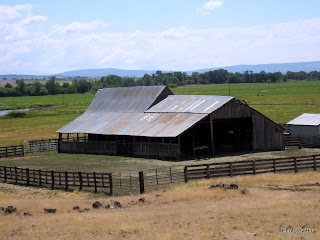 Further down the road I managed to take a wrong turn in the town of Adin, CA. and spotted this barn. I loved the various angles reflected in the roof!

We’re settled in a Forest Service campground among the Ponderosa at the south end of Eagle Lake. Tomorrow we’ll pick up 395 and continue south.
Posted by Just Finding Our Way at 3:16 PM