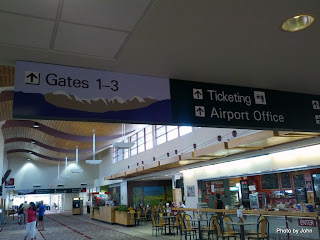 It seemed like such a simple idea when we dreamed this up months ago.  Carleta would bring Spencer to the Kalispell airport and drop him off so he could travel with us for several days before the wedding.  They did get here as planned, but the flight back to Seattle was full so Carleta couldn't take advantages of her pass privileges.  As a result, I'm back at the airport at 5 am to drop her off, and leveraging their internet connection for the second day in a row! 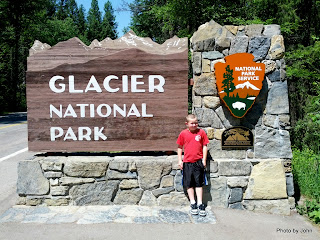 We had to subject Spencer to the obligatory "stand by the park sign" picture, and of course, the sun was in his eyes.

Of the three major parks so far, this is the one that allowed me to reserve a specific campsite.  I was so surprised to pull up and discover that I'd selected a pull through on the wrong side of the road.  We've gotten so used to having the door open towards the road that we didn't even consider driving around the loop backwards. 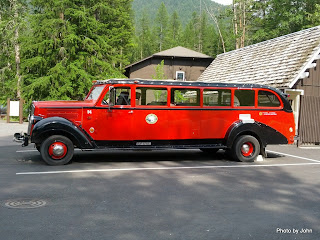 We drove around the area a bit, primarily to figure out where we could launch the canoe.  In the process we spotted one of the historic red buses, similar to the yellow buses in Yellowstone.  Much to my surprise, the "White" emblems were removed from the hood and a small Ford emblem was added.  I knew that the buses had been rebuilt several years ago and put onto a Ford chassis using LP fuel.  I assumed the ones in Yellowstone had as well. 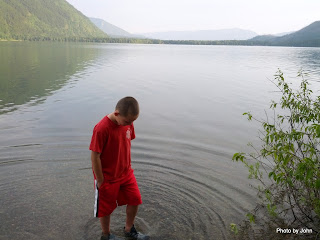 Spencer took me out for a walk around the campground and found a short-cut to Lake McDonald. He determined that the water was cold, but not too cold, and proved that his shoes were designed for water.

He's already finished most of the Jr. Ranger book and has picked out the Ranger talk he wants to attend to finish it up.  We're looking forward to getting the canoe on the water.
Posted by Just Finding Our Way at 4:16 AM