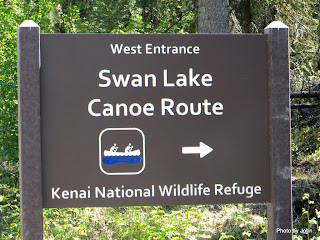 North of Sterling is a destination that I’ve wanted to visit since we first started planning this trip. The Swan Lake Canoe Route is one of two canoe routes in the immediate area. Other than a book written 18 years ago, there isn’t a lot of information published. 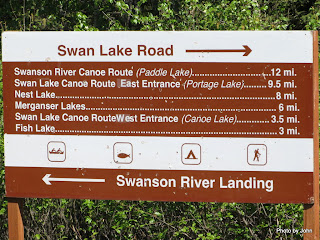 It’s gravel road from Sterling to get to the lakes. Seventeen miles on the Swanson River Road and then 3.5 to 9.5 more to get to the entrances to the route. 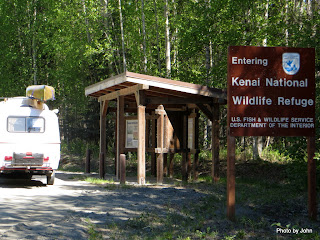 Most of the drive and all of the canoe routes are in the Kenai National Wildlife Refuge. No motors on the lakes. 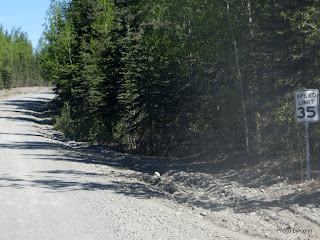 The road is posted with a 35 mph speed limit, but with the trailer in tow, it took me just over an hour just to get 17 miles to the intersection of the Swanson River road and the Swan Lake road. Lots of washboard, chuck holes, and occasional rough road repairs. 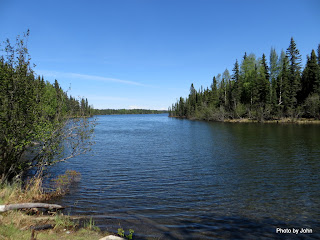 It’s worth the drive with the trailer, at least for the first 14 miles. There are several US Fish & Wildlife campgrounds with the largest (12 units) on Dolly Varden Lake at the 14 mile mark. I thought the prettiest was Rainbow Lake at 15.5 miles in part because it has just three spaces, on the lake shore. Unfortunately, it was full. BTW, park and walk in at Rainbow since the only turn-arounds are the campsites. You just might get to back out, up the curved entrance. 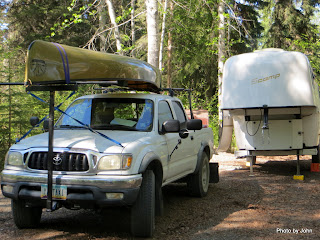 We made camp at Dolly Varden with the idea that I could paddle here with Turk. I’m not interested in doing solo portages on the Swan Lake circuit with a dog in tow. It will be easier to visit the other campgrounds and launch points without dragging the trailer further. 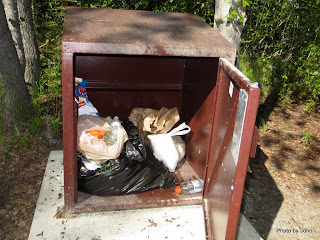 It is unfortunate that people have space in their vehicle to bring things to the lake, but find it more convenient to stash their trash in the bear box instead of hauling it home with them! I gave it to the Ranger when he drove through the campground. 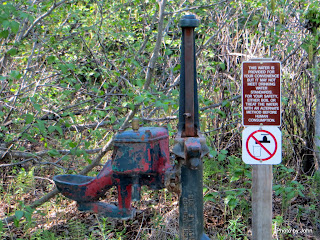 The campground has an outhouse, and a non-potable water pump that was missing the handle. Pack it in, pack it out is the order of the day.

Camping is free with a 14 day limit. Dolly Varden has lots of shade which means less breeze and more of the infamous Alaska state bird, the mosquito!

No cell coverage at the lakes which means I'll be out of touch for the next couple days.
Posted by Just Finding Our Way at 12:40 PM