End of the (Rail) Road 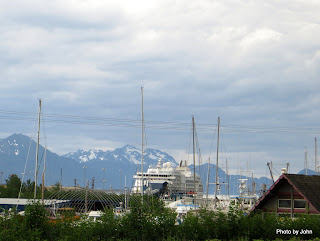 We left Seward this morning under overcast skies and with a different cruise ship in the harbor. It rained a bit last night and for about an hour during the drive this morning for those that are keeping tabs. 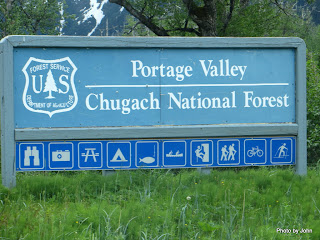 We dropped the trailer at a Forest Service campground near the Portage Glacier, 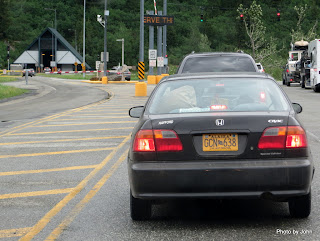 thereby avoiding the extra fees for the 2.2 mile one-way tunnel to Whittier and reducing the parking challenges in Whittier. Toll for a car or pickup was $12 (paid eastbound only) while a vehicle under 28 feet was $20 and it went up rapidly from there. 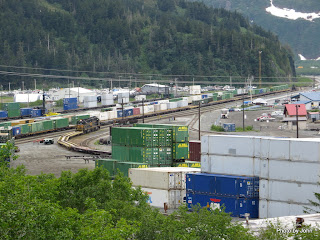 Whittier is a railroad town in a tourist setting. It's the end of the road for the Alaska Railroad. Alaska Marine Lines (AML, a subsidiary of Lynden Trucking) provides rail barge and combination barge service out of Seattle to Whittier. 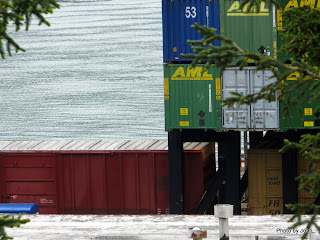 I was unable to get a good camera angle during the unloading process of one of the combination barges.  There are eight sets of tracks on the main deck, with containers stacked up to three high on a framework over the cars. There is a nice set of photos of the loading process available on TrainWeb. 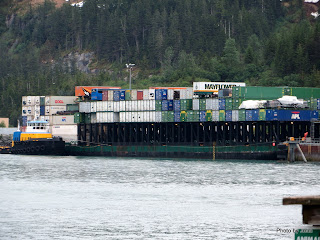 A view from the other side after all the rail cars were unloaded. 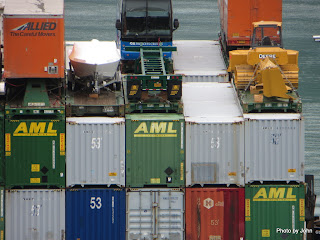 The top load stuff was especially interesting - everything including a full size tour bus, an RV, and three household goods moving vans. Come to think of it - sorta logical for Mayflower. 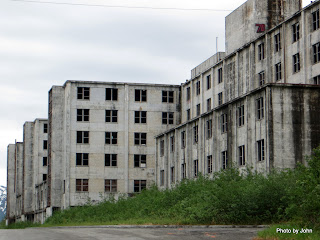 The town was originally a military post. Two large cement structures were built by the military. One is now a cold war relic and looks the part, 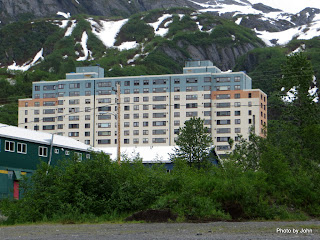 while the other provides condos for most of the residents of the town.

The town had a small, but very well done, museum documenting WWII battles in the Aleutians and US/Russian cooperation and conflict during WWII and the Cold War. $5 entrance and well worth a stop. 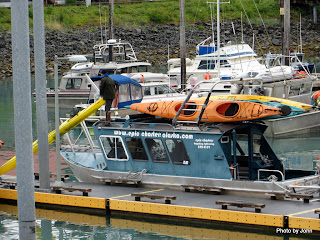 The marina is home to a number of companies providing shuttle service and/or guided kayak tours in the area. In addition there was a small commercial fishing fleet and lots of sports fishing. 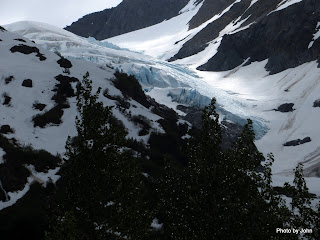 Home for the night is the Williwaw Forest Service Campground, positioned below Middle Glacier about 2 miles west of the west end tunnel portal. $18 per night but half price with the senior access pass.

Zero bars of 3G became 3 bars with the antenna and amplifier.
Posted by Just Finding Our Way at 7:41 PM