With the sneezes and sniffles in full bloom, we left Los Burros without a clear destination in mind. Thanks to Campendium, I knew of two potential boondock spots with more elevation, and some Forest Service campgrounds that sounded like they might be workable for the last three days of this journey. 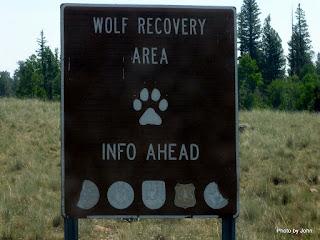 Beehive Spring was a beautiful spot about a mile back, and out of sight of the highway. Much of this area of eastern Arizona is involved in a wolf recovery project to the consternation of the ranchers. 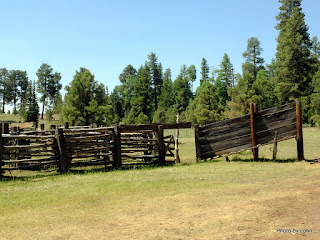 There were a couple very nice spots near the sheep corral, complete with open skies to the south for solar and three bars of Verizon 3G that showed signs of boosting potential. This would have been home, except for the excessive population of huge flies that would make sitting outside unpleasant. Perhaps some other time...

The next stop was Fish Creek, again complements of Campendium’s database. No cell signal, four rigs already scattered throughout the area, and more road traffic than we’d expected so we headed towards the town of Greer and an area with lots of geocaching opportunities. 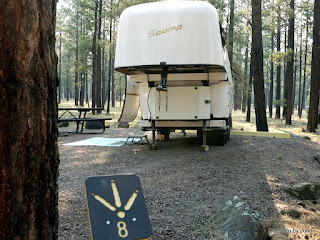 No boondocking is allowed in the Greer Recreation Area so your choices are one of two Forest Service Campgrounds. We decided on the large Rolf C Hoyer campground because they had 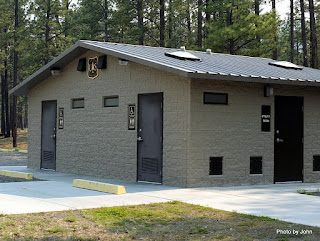 free showers IF you're staying in the campground! Two buildings with four very nice individual shower rooms in each building, that were centered in the employee loop. With 100 campsites in the campground, the eight showers seemed minimal, but I never saw a lineup. 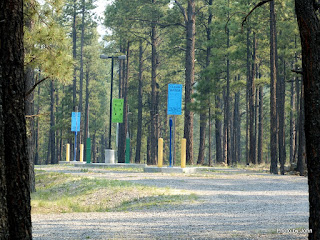 The other thing of interest was the double sided dump facility.

The campground has very nice crushed gravel roads and parking pads. Two loops (25 sites) are held back from the reservation system. The host working at the front entrance says they never run out of first-come, first-served sites. Even though it was a late June weekend, the campground was less than 30 percent full.

We’ve been spoiled and this campground reminded us why we prefer small, out-of-the-way places. The two families that selected sites near us decided to continue talking (and hollering) well past quiet time. At least they were having fun.

Most areas of Hoyer Campground had next to no cell reception. It would wander in and out a bit, but was essentially unusable. The hosts suggested going to the "office" - a parking lot across the road at Greer Lakes that had usable reception, bumped to 4 bars of Verizon 4G with the Sleek amplifier. 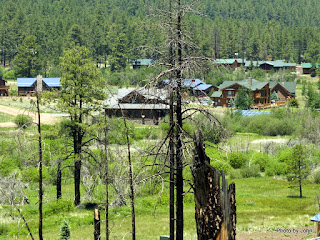 Greer is a little mountain town that survives on resorts and cabin rentals to desert dwellers getting away from the heat. In 2011, the massive Wallow fire burned very close to town. 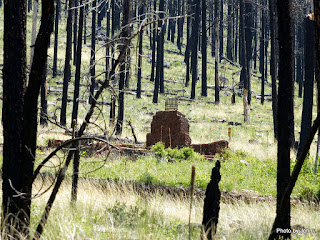 In some areas, fireplaces and foundations reminded us that not everyone was lucky enough to have avoided the damaging inferno. All because someone didn't bother to put out their campfire!

While we were driving around, we drove through the nearby Benny Creek Campground. Older, tighter, many sites not very level, and cheaper - until you figure the $8 to use the showers at Hoyer or the fee to use the dump there. No cell service there either.

The out of the way Winn Campground was the hidden gem. It's not in the Greer Recreation Area but is in an neighboring Recreation Area that also precludes boondocking. It's at a higher elevation and has less traffic. About 15 of the 63 sites were occupied when we drove through on a Saturday. Water and toilets, but no showers or dump. The price was $14 (50% less for seniors) vs. $20 at Hoyer. In addition to the greater reduced traffic noise, it had about 3 bars on the Verizon phone without the amplifier. If we're going to a campground, Winn would be our choice next time.
Posted by Just Finding Our Way at 2:30 PM