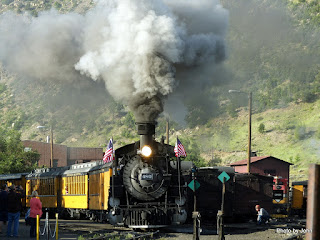 On Independence Day, BJ & Spencer headed to the train station with our daughter and her husband, leaving Turk and I with a day of independence. After we watched their train pull out of the station 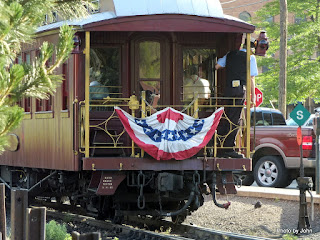 and disappear down the track, 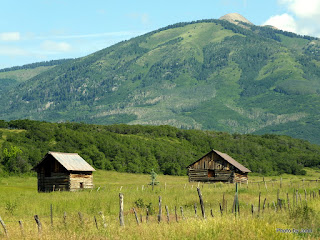 we headed for the hills. Our self-imposed task for the day was to find as many of the “Chasing Rails” series of geocaches as possible. These caches were placed along the former right of way of the Rio Grande Southern railway. With the exception of the roadbed in places, nothing survives of the RGS facilities, so you get pictures of old buildings and barns instead. 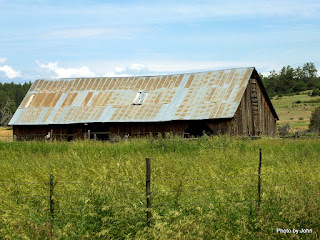 In addition to the two caches that Spencer and I had picked up previously, there were 7 more caches in the series scattered between Durango and Delores. For the most part, I took them in series until I ran out of time, skipping the 5th one for awhile. 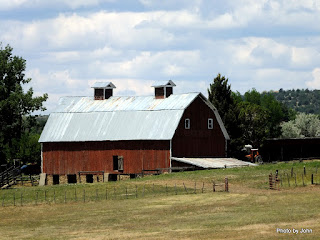 I couldn’t find one, and ran out of time before I got the last one in the series. I headed back to pick up number five and keep an appointment. 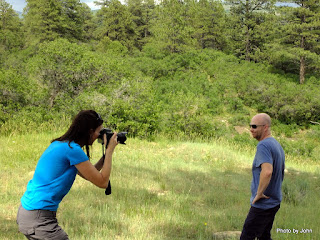 I’ve corresponded with Leigh & Brian, creators of Campendium, for months. They were camping just a mile from the 5th cache in the series. I totally enjoyed the chance to meet them and chat about their creation. It was nice to get a candid shot while Leigh was using Brian for the test model before she took a picture of Turk and I. 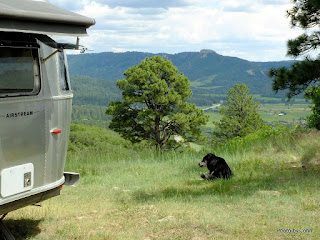 Curtis and Turk got along well. Curtis seemed to enjoy keeping an eye on his domain with a view that went for miles and a cool breeze in the trees. I think it could be tough working at this campsite with that view out the back window! 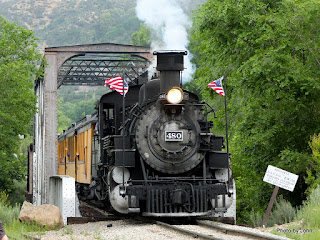 Turk and I got back to town just before the train arrived back from Silverton. 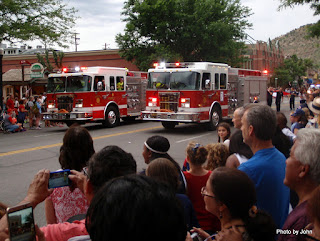 It was especially nice that the town threw a parade that evening, just because we were there! I think we all enjoyed our different versions of Independence Day.
Posted by Just Finding Our Way at 2:30 PM