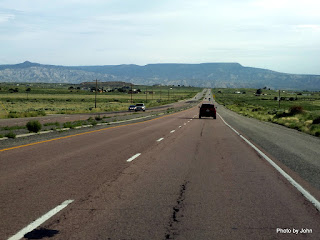 We left Gallup on Thursday morning, July 2, headed for points north. Didn't mind putting Gallup in the rear view mirror. It's a pretty rough town with not much to it's credit except that it's well positioned.

I'd been this a way a couple other times but forgot how beautiful it is as you head north across the Navajo Nation. 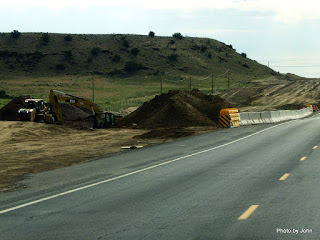 Looked like there will be another large section of 4 lane on this route sometime in the future. There were some construction zones, but even those flowed fast enough to keep the State Troopers busy handing out tickets to heavy-footed drivers. 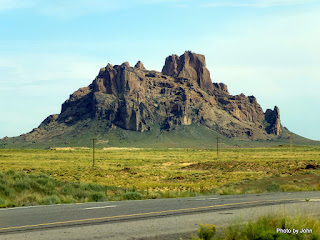 There were several rock formations to appreciate along the way, but Ship Rock was off to the west, too far to get a picture. When we got to the town of Shiprock, we headed east towards Farmington & Aztec, just because we could. 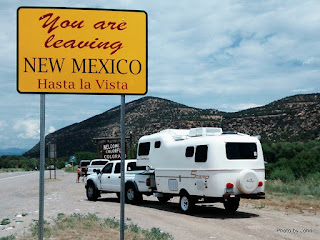 We pulled over at the border between New Mexico & Colorado for a bite of lunch, only to discover there was a geocache located 50 feet away. Needless to say, we had to add one more to the list. 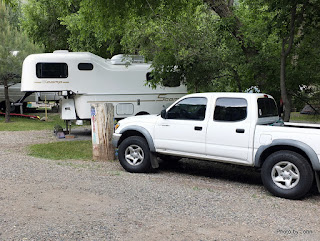 Home for three nights was Lightner Creek Campground just outside of Durango. With the big holiday weekend and potential for warm temperatures, we elected to go with reservations, hookups so we could run the air conditioner, and a swimming pool. 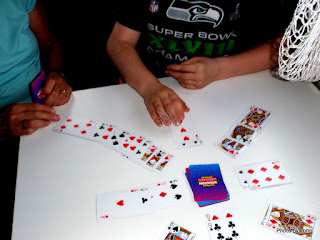 Spencer was doing a good job teaching us stuff. Not just geocaching. He also taught us Kings Corners - a solitaire style game. 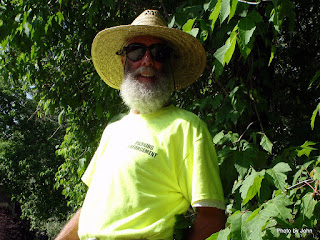 Friday morning, Spencer and I went out geocaching. I was hoping to find One D&RGS Durango Station, and hoping it would be big enough to house my travel bug, Put a Wrench in It! We found the cache, left the traveler, and more amazingly, met the cache owner! It's no wonder he says not to worry about the parking guy at Albertson's! He's placed a whole series of caches celebrating the long gone Rio Grande Southern narrow gauge railroad.

I pulled a stupid one. On Friday, July 3rd, I stopped by the National Forest Office in Durango to get a copy of the Motor Vehicle Map which would show legal boondocking locations in the National Forest in the area. Of course, the office was closed because of Independence Day so no map to aid my research project. I had to chase D&RGS caches instead.
Posted by Just Finding Our Way at 2:30 PM