Checking Out The Neighborhood 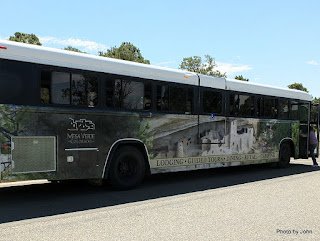 The big reason for staying at Mesa Verde National Park was for Spencer and I (since BJ did the train in Durango with him) to take a tour of a series of ruins culminating with Cliff Palace. 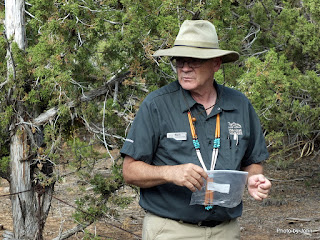 Our guide for the 4 hour tour was a retired educator who lives in the area. He was able to bring lots of local history to the discussion, unlike seasonal employees who memorize their spiel. 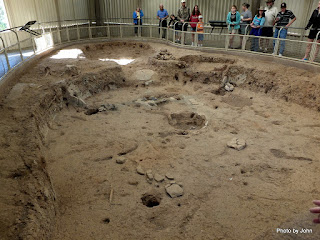 We started on the mesa, visiting remains of a pit house. The park has build buildings over some of these areas to protect them from the weather and to secure them in hopes of limiting damage from thoughtless visitors and vandals.

I was interested to see that the kivas associated with the pit houses (much earlier than the cliff dwellings) have small stones in the mortar, much like the later dwellings at Chaco Canyon. I asked, but didn't get an answer. I'm betting this one was restored after excavation, thus the Chaco style. 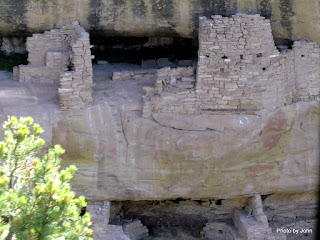 The tour stopped at a couple canyon overlooks, and then pointed out other ruins as we slowed down at a few thin spots in the trees. This two-level ruin has a set of "moki steps" to the right of the leftmost wall. You would still need a ladder to reach the steps from below. 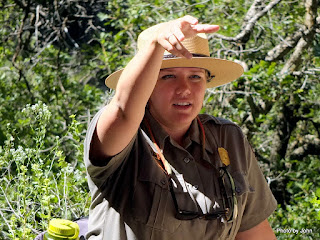 Our guide turned us over to a National Park interpretive ranger for the tour into Cliff Palace. I should have asked her how many times each day she does this tour. 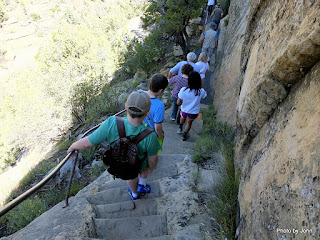 Spencer met another boy his age while we were waiting to start the Cliff Palace portion of the tour, so they talked various video games while negotiating the carved steps and narrow trail to the ruins. 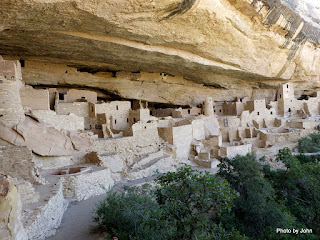 They estimate that up to 125 people lived here at the peak. The ruins were constantly under construction for the 100 years that it was occupied. 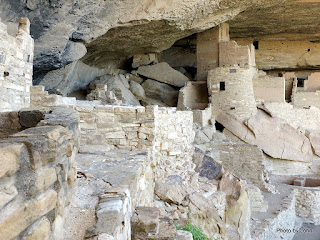 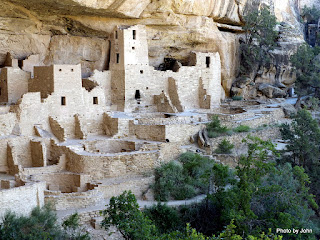 Both the left side and the right side of the development had tower structures. The upper portion of the square tower in this picture had been rebuild at some point by the park. Portions of it had a plaster finish that was now falling off. The dark around the lower doorway is from people touching it while they look inside. 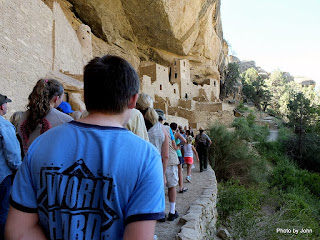 Although tickets are necessary and you can only approach with an official guide, they do manage to run a lot of people through here. There were over 40 of us on the tour and there were always two tours below the rim at any given time. 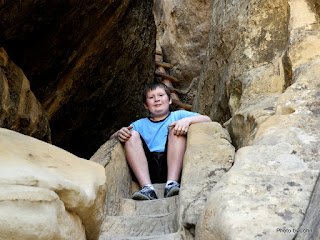 This is the route out. The carved stairs were very narrow, before transitioning to ladders (behind his head) for the remainder of the ascent through a narrow slot. 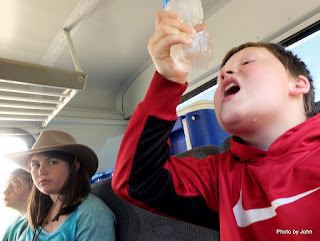 When we got back to the bus, Spencer demonstrated how to bite a small hole in a water bottle so he could drink it from the bottom. I don't think the young lady was impressed.

It was nice to visit, but I don't think we'll be moving to this neighborhood.