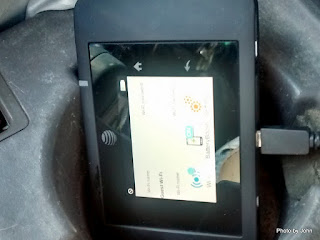 The plan was to be on the road by 8:30 - a plan that we beat by 45 minutes. We hadn't gone 200 yards when BJ asked why she was getting wi-fi on her phone. Don't know - I turned it off and stowed the Verizon and the AT&T hotspots in the trailer the night before, or so I thought. Turns out I hadn't turned off the AT&T hotspot and the battery hadn't died yet. It ended up riding with us so I could recharge its battery. 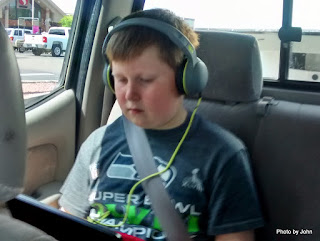 We'd planned some stops along the way to chase some caches and break up the drive for Spencer who apparently didn't get the Schroeder "windshield time required" gene. When he wasn't looking for a cache, he had the DVD player going. 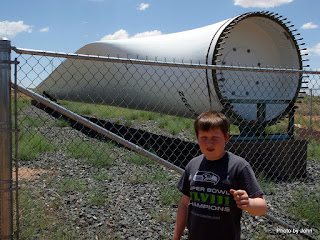 We stopped just out of Holbrook to look at a 140' long windmill blade on display. This picture was taken before Spencer successfully located the cache and learned that those twisted wires at the top of cyclone fences are sharp! It was a good lesson, he'll live, and it really was a very neat hide!

We stopped for a bite of lunch in Holbrook and parked behind a Scamp 16. That resulted in a long conversation with them about Scamps in general and our 19 in particular. They were just returning home from a 7000 mile trip to Florida. 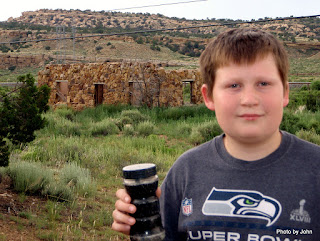 As we drove east from Holbrook, we kept expecting to run into a thunder storm but it passed us to the south. We stopped at the original truck inspection station (it predates the creation of Route 66) west of Gallup and found our first New Mexico cache. Make a note: I spotted this one before my instructor, but he got it logged first. I left a travel tag here that is supposed to go to Backus, Minnesota and back to Mesa - we'll see if it eventually gets there or not. 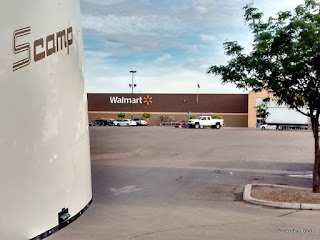 Home for the night was a slice of Americana. We parked on the southern edge of the Wallyworld parking lot in Gallup along with several others. A later thunderstorm, the trains, and the I-40 traffic provided music to sleep by... The next morning I refilled the cache of earplugs in the Scamp.
Posted by Just Finding Our Way at 2:30 PM