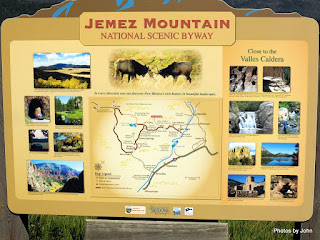 and that was enough temptation for me. The gal at the Los Alamos Information Center told me all about the Jemez Mountain National Scenic Byway but also said not to tow a trailer over the hill towards Chaco, so.... 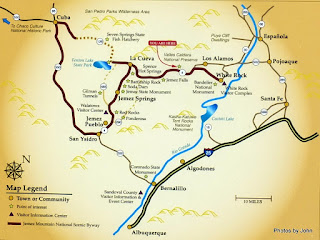 I had to go check for myself. The whole idea of the scenic route sounded right up my alley. The plan for the day was to go from Los Alamos (right center), across the top to Cuba (top left), then in order to get back to the trailer again, go down to San Ysidro, up through Jemez Springs, and back to Los Alamos. 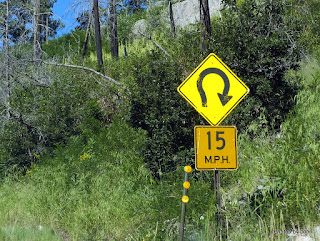 It started with this. Actually, it didn't. The first couple were 10 mph but I was too busy to take a picture. 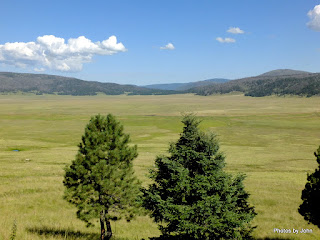 I passed through a section of Bandelier National Monument before arriving at the first views of a huge, wide open, grassy valley. This valley is a caldera, formed when the land subsided after a massive volcanic eruption. I was taken with the expanse - nearly 90,000 acres that was once the Baca Ranch. 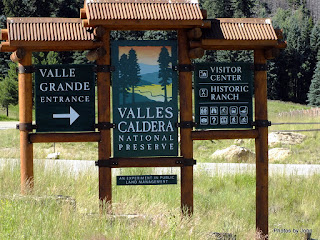 I'd heard about the Valles Caldera National Preserve in Los Alamos. It's in the process of becoming a national park and there have been a lot of public input meetings in the area. It wasn't my destination for the day, but the gate was open so... 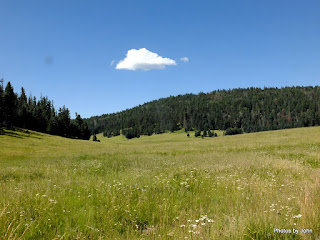 There are only 12 "walk-in" backcountry vehicle permits available per day. I didn't expect to go beyond the Visitor Center but, by 10:30 I have one of the last coveted (free) permits in hand. I'm only 20 miles into my planned trip, and now I'm off on a serendipitous wild goose chase. 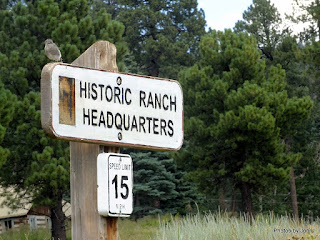 The historic ranch headquarters are located about a mile past the Visitor Center. There are several homes of various ages in the area 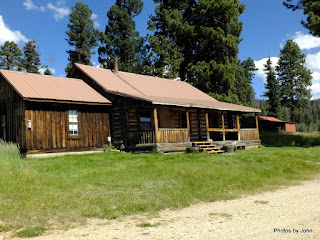 including some really cool log homes with big porches. I was started to feel heart palpitations trying to avoid covetousness. 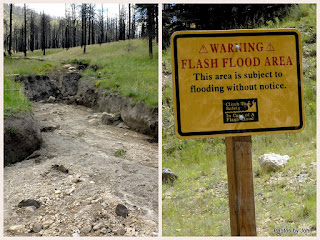 The open roads in the area were gravel. They'd be considered good logging roads when I grew up. I must admit, I was starting to wish I had a good 12v. air compressor so that I could drop the air pressure in the tires until I was ready to tow again. I know they had a nice road grader because I saw it hiding behind the houses, but I don't think they use it. 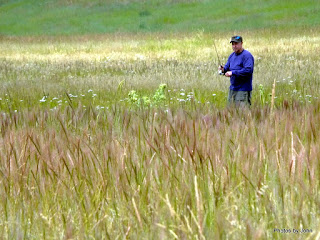 As I got up towards the north end of the road I noticed a few people out fishing in the meadow. 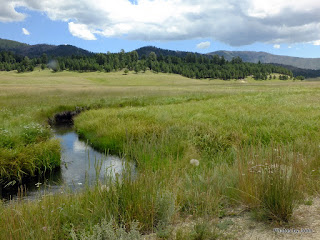 Turns out the headwaters of the San Antonio creek are world class trout fishery. You have to have a New Mexico license, plus a day use road permit, plus a special fishing permit, but obviously people were finding it worthwhile. I must admit, it was a pretty beautiful place to be, fishing or no fishing. 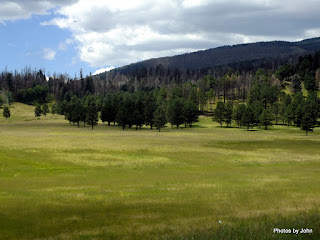 I headed back because the clouds were building and I still have lots of miles to go if I was going to finish my prove she's wrong research trip.

As I continued southwest on Highway 4 I noticed the snow plow sign and immediately beyond it saw a group of young teens learning to rock climb - in shorts. Somehow, these two don't seem to go together.

I'd heard there was some road construction but the surface had been beautiful, new asphalt. So new, it didn't have any lane markings yet. I got stopped at the head of the line where they were loading dump trucks full of gravel. Once the Follow Me truck arrived and we got a little ways down the road, I saw the construction - They're putting down a seal coat of gravel over the brand new asphalt. They do it differently here.

Shortly after I turned west on Highway 126 I saw the Caution sign. Is an RV trailer a "House Trailer?" Does this mean I couldn't do what I was hoping to do? Shortly after passing the entrance to Fenton Lake State Park, the asphalt ended 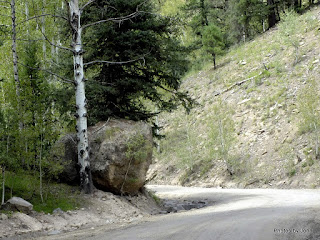 and the road became truly one lane in a few places, rutted and potentially very soft when wet in places, but all told, a decent forest road. 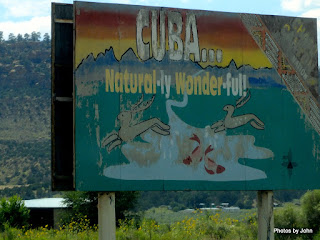 Eventually, I got to one of my goals for the day. I've always wanted to go to Cuba, and now I can say I did. Didn't see any of those late 1950's Chevys running around, but clearly it was Cuba! There's a road that leaves from here heading west to Chaco Canyon but time is fleeting, and I still need to get back to my trailer on the mountain above Los Alamos. 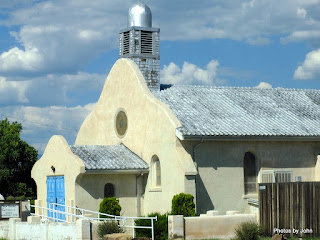 Apparently, when I started north through San Ysidro, I was getting into the heart of the Scenic Byway. There were neat adobe style houses but the church was the only picture-on-the-fly that was reasonably in focus. 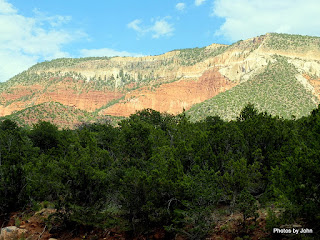 The mountains were beautiful, but the light in the narrow canyon was disappearing. There were supposed to be hot springs, and waterfalls, and old pueblos, and places to spend time gazing in wonder, but... 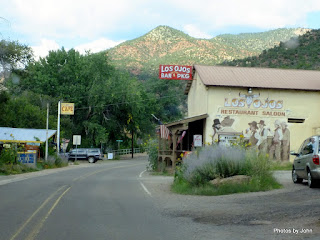 Slowly cruising through the town of Jemez Springs, I happened to get a picture that included the Los Ojos Restaurant and Saloon. Apparently it's been voted "most authentic," whatever that means. 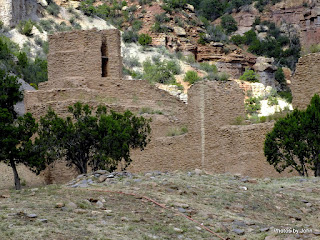 I'd been pushing because I wanted to see the remains of Giusewa that was built about the time the Pilgrims were arriving at Plymouth. Wouldn't you know it, they were turning off the lights and putting up the closed sign as I drove up, so all I got was this picture. It did intrigue me how much the structure blended into the land. 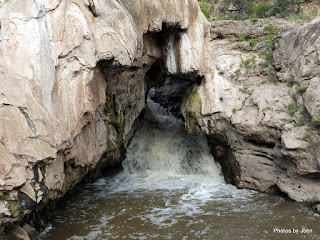 What was learned is this route would be ideal for a BMW motorcycle although I didn't see any motorcycles during the day. I also learned that the hairpin turns combined with the grades and altitude was really going to put the squeeze on the Taco's towing abilities.

200 miles, well over 8 hours, and the end result is that you can't get there from here, at least not traveling the way I'm traveling. The Jemez Mountains deserve at least a week of exploration alone.

Chaco is going back on the "gotta do it sometime" list. And I'm going to have to say she was right. I think that's the second time that's happened in a couple months. I hope it's not turning into a habit. ;-)
Posted by Just Finding Our Way at 2:30 PM