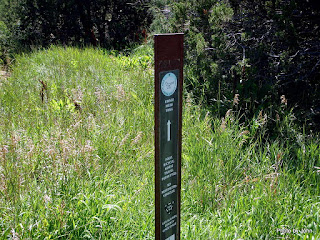 I stopped by the Information Center at the Chamber of Commerce with some questions. They weren't hitting on all cylinders, but they were quick with a map and information about the wide variety of trails in the area. Unlike some friends who have been specializing in trails with verticality around Ouray, Colorado, I was looking for something easier. Kwange Mesa Trail it would be. 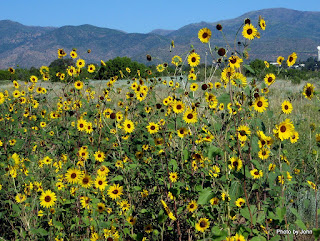 Of course, I didn't read all the info - I just looked at the map and decided I'd go out on the old road, and come back on the trail. For some reason, their on-line info has it marked the other way.

Turns out the old road may have been related to an underground gas line that runs down the mesa and off the end. 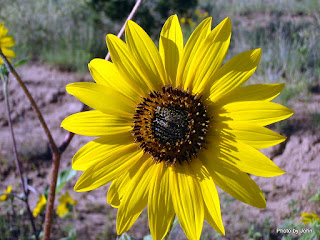 I have no idea what the flowers were, but I sure like them. They were growing like weeds on the roadway on the way out. 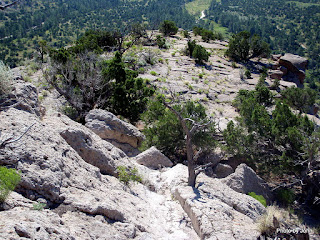 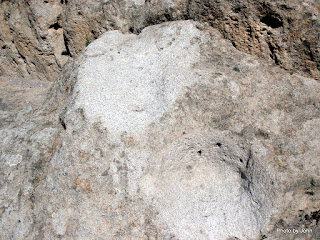 In spots, individual steps had been cut and or worn in the rocks. Clearly, this trail was here long before Los Alamos became the Secret City.

I had to decide if I wanted to descend to a third layer where I could perceive a route, but it didn't feature the worn trail to give me confidence. 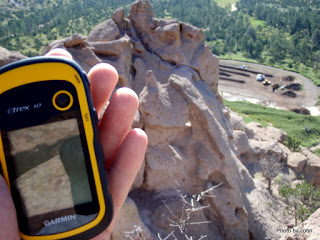 I was glad I was wearing my hiking boots and that I'd done some rock climbing as a kid. I did manage to find the cache that was tempting me. It's only been found six times in the last two years - no wonder it was rated the way it was.

It wasn't a free find. On my way back up to the second level, my faithful, ever ready Nalgene bottle came out of my fanny pack and bounced down the cliff. :-( 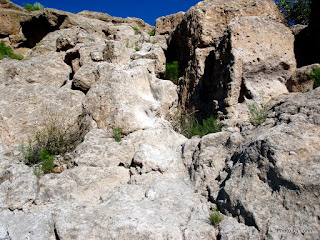 The route from the second level back up to the top was very clear on the return. 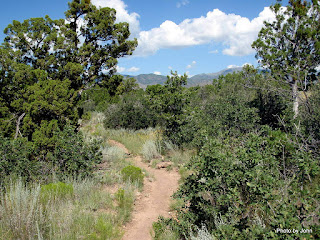 The trail back wandered through grass and trees, while my mind wondered why the end of this mesa wasn't built out with housing like the mesas to the north and the south.

The trail proved to be a good test of the ankle that I twisted while I was at Animas Forks. It's finally no longer sore no matter how much I push it. About 5 miles all told with 6 lonely caches = lots of fun!
Posted by Just Finding Our Way at 2:30 PM