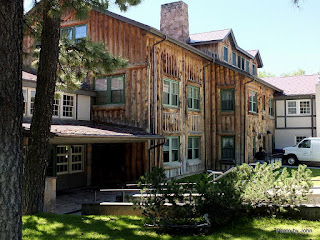 One of the more recognizable buildings in downtown Los Alamos is constructed with vertical walls logs. It was originally built as the main building of the Los Alamos Boys Ranch. The Boys Ranch was created in the 1920's after the original homesteader proved up and sold out. 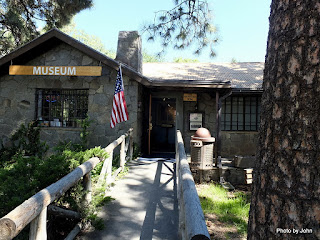 The historical museum is housed in one of the houses on Bathtub Row, houses that were built for the teachers at the Boys Ranch. The museum does a very good job in compact space to share about the original timber operations, homesteaders, and school prior to the government requisition of the area for the Manhattan Project. 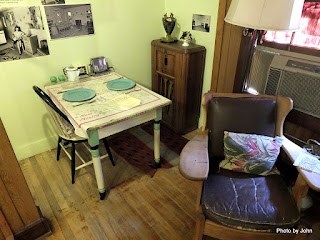 Most of their displays didn't lend themselves to photography. This area represents the living and dining area in one of the better homes during the war years. I suspect the window air conditioner was a later acquisition! 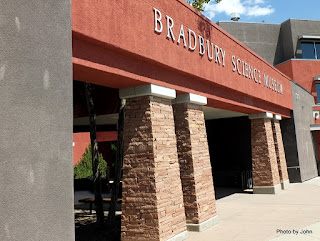 Conversely, the Bradbury Science Museum was large, relatively new, government funded, and fully of bright displays and an excellent movie about the wartime operations in Los Alamos that limited the bombs effect to about 2 seconds of mushroom cloud footage. 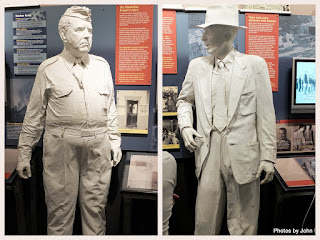 I really did like the life sized, highly detailed statues of Major General Leslie Groves of the US Army Corp of Engineers (who built the Pentagon) and Dr. J. Robert Oppenheimer. There was a section of the museum that provided vignettes of lots of the people who lived and worked at Los Alamos, but the museum ignored the tension between the General and the "prima donna" civilian scientists who, in his mind, were taking advantage of the military resources to, for example, have their babies in the hospital where they got free care. 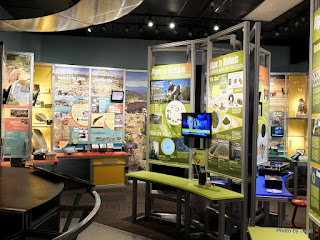 Much of the museum space was taken up with colorful displays about a wide variety of subjects such as the use of algae as a fuel source. Based on what was seen here, you were left with the impression that the Los Alamos National Laboratory was nearly the sole source of knowledge on this subject, something Arizona State University at the Polytechnic Campus would find offensive. 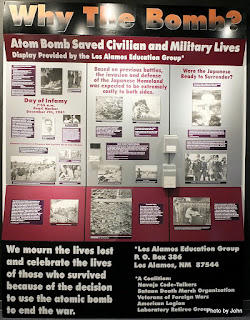 Over in one corner was a large panel, perhaps 6 feet wide by 8 feet tall justifying the use of the bomb, "Atom Bomb Saved Civilians and Military Lives." The display was funded by the Los Alamos Education Group, a coalition of Navajo Code Talkers, Bataan Death March Organization, Veterans of Foreign Wars, American Legion, and Laboratory Retiree Group. 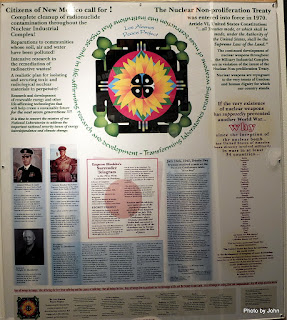 On the facing wall was the opposing viewpoint on a poster that might have been 4 foot square. It included quotes from Admiral William Leahy, General Douglas MacArthur, and General Dwight D. Eisenhower all saying use of the bomb was not necessary. The most interesting thing on the poster was the text of a telegram from the Emperor of Japan requesting a peace treaty over three weeks before the first bomb was dropped on Hiroshima. 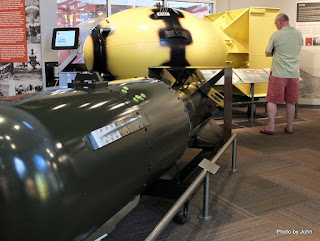 Over in one corner was an example of the Little Boy (Uranium-235 dropped on Hiroshima) and Fat Man (Plutonium-239 dropped on Nagasaki) bombs.

Throughout the museum, even on museum descriptive placards, there was a dissonance of dates and other information.

I am impressed with the civil, industrial, and human resources that made this happen, but it's still not clear to me that the use was necessary. Meanwhile, the museum does a great job of making it all seem nice and tidy.