I Had A Plan 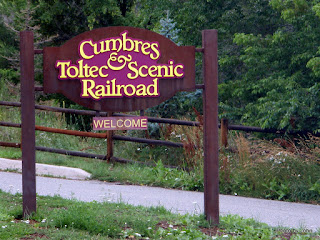 Some years back, BJ and I stopped in Chama on our way to Heron Lake. As a result, I knew the Cumbres & Toltec was based here and was part of the reason to come back this way. Unfortunately, when I got to Chama this time, I discovered the memory card wasn't in my primary camera. As a result, these are all from the little camera or my cell phone. So much for careful planning. 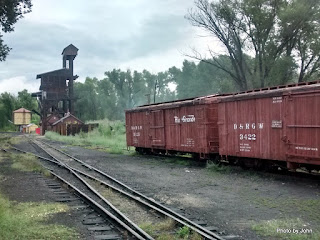 This narrow gauge line once once part of the the same interconnected group as was the predecessor to the Durango & Silverton train. This portion of the lines and equipment was purchased by the States of New Mexico and Colorado to operate as a scenic train, unlike the Durango train that is privately owned and operated. 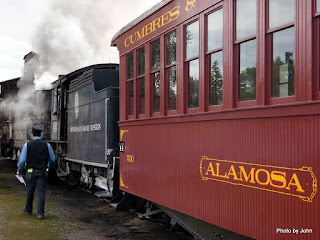 They had quite the line-up when I got there on Saturday, about an hour before departure. They run a single train from Chama, New Mexico to Antonito, Colorado and another train from Antonito to Chama each day during the season. 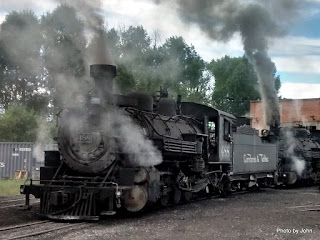 I was surprised to see that they had four engines fired on Saturday morning. Two were in front of the engine house, one headed the day's consist, and one was sitting 40 yards ahead of the consist. I wonder if the ones at the engine house were part of their Fireman and Engineer classes? 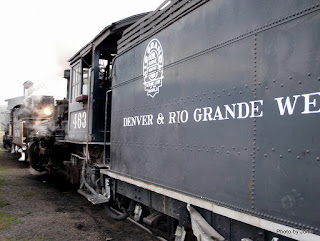 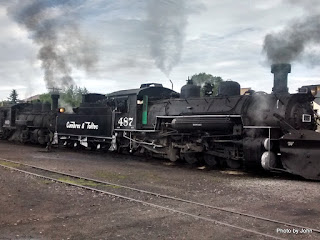 One of the differences between this operation and the Durango train is that here they let you wander all over the yard while the equipment is operating. It wasn't long after I arrived that the 487 backed up and connected to the consist. Looks like it was going to be a double header this morning. 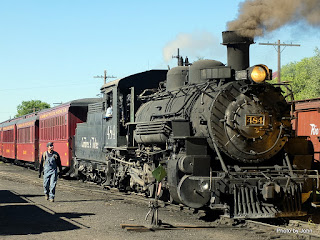 I came back Sunday morning with the regular camera, surprised to find that the day's consist had just a single engine this time. I attended the little Community Church across the street but never heard the train leave the station. I wonder if they have a "no whistles" agreement on Sunday mornings?
Posted by Just Finding Our Way at 2:30 PM