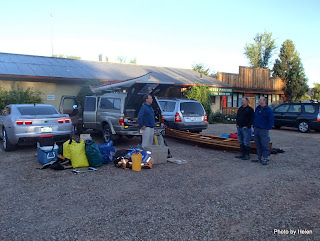 This year represents the 10th Green River flatwater trip for me in the past 14 years. As usual we started the trip at Tex's Riverways in Moab, UT who provided the shuttle services for the four of us. This time we had two other groups of two launching with us. 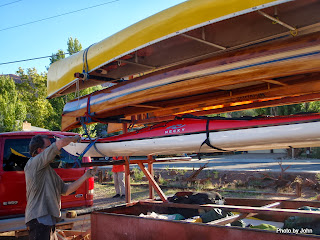 Once the boats and gear were loaded (we had a rented aluminum tandem canoe, my single canoe, and a beautiful fiberglass sea kayak in our group) we were ready to hit the road on our nearly annual adventure. A big thanks to Helen for the invitation after my own planned trip was cancelled. 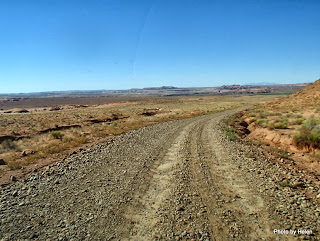 We headed up the road towards the town of Green River and then started wandering down a gravel road towards our launching point at Ruby Ranch, 97 miles above the confluence of the Green River with the Colorado River. 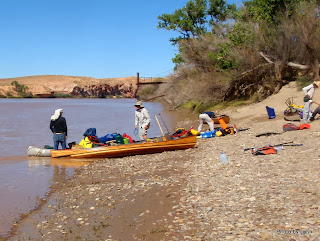 The launch at Ruby is on private land and has a launching fee, but the launch area is much nicer than some of the other launch locations.

We stopped at Trin Alcove at river mile 90 for lunch but it was really messy. Mud up to knee deep and very slippery. The canyon had flashed recently and potential camp sites were fairly rare. Amazingly, none of us got pictures of the Trin Alcove "beach." 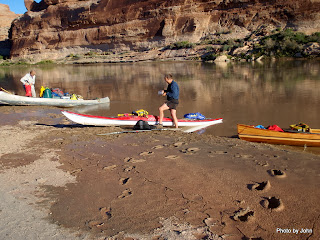 Home for the night was a sandbar at the lower end of June's Bottom, about mile 88. Because of the higher water a couple week prior, every low edged sandbar featured a muddy ring near the water. No worries, we were off to enjoy nine days on the river! 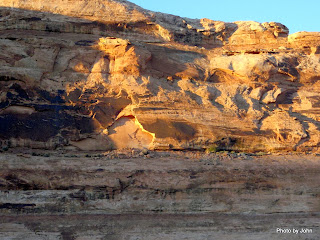 The evening was spent watching the light change on the canyon walls across the river.

Flow at launch was approximately 2390 cfs.
Posted by Just Finding Our Way at 10:08 AM