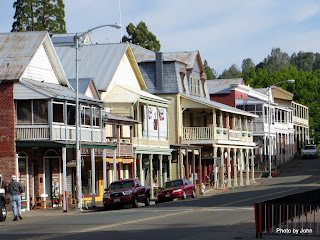 We left Jackson, California this morning in search of some Verizon connectivity so that we could post pictures from the last couple days. Our plan was to drive through Sutter Creek, Amador City, Placerville, and Coloma on our way to a County Park east of Marysville.

Finding some connectivity just south of Placerville, we added three posts from the last couple days and in short order had suggestions about a mine in Grass Valley. We'd planned to spend time at Coloma, home of the Marshall Gold Discovery State Historic Park, but they haven't figured out parking for RVs over 20 feet long so we waved and kept moving towards plan B. 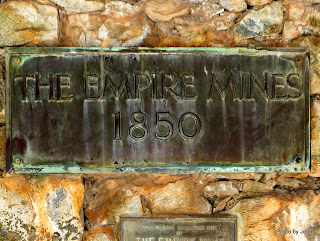 The Empire Mine State Historic Park was wonderful. Again, not friendly to larger RVs, but we fit since the parking lot was near empty and we could take two end-to-end spaces. Entrance fee was $7 per person and pets on leashes were welcome. 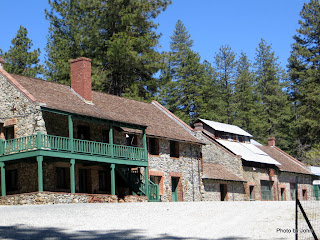 This is the first hard rock mine that we've visited. It operated for about 100 years from approximately 1850 to around 1950. Many of the buildings, including the office, used a combination of rough rock walls with clay bricks around the doors and windows. Clay bricks also capped the rock walls. 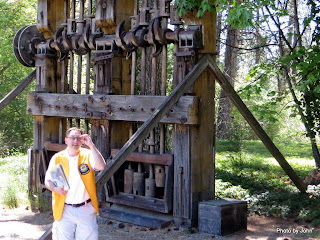 We were very fortunate to have a grandson of one of the original Cornishmen who worked the mine as our docent. He even told us which shop in Grass Valley had the best pasty - although none were as good as his grandmother's! 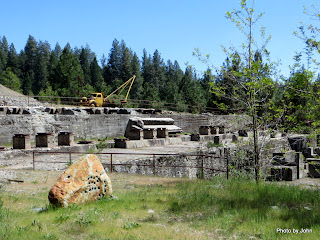 With the exception of the 10 stamp mill used as a display, the mill was gone except for the footings. For this mine alone, they had an 80 stamp mill that could be heard for three miles. Initially it was powered by steam until all the timber was gone, then a Pelton wheel, and eventually electricity. 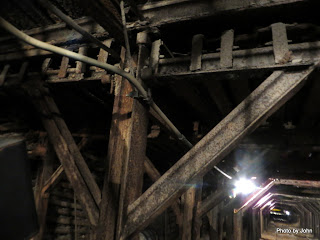 I found it amazing that they would allow you to descend a little ways into the main shaft. Some of the mine buildings as well as the shoring at the head of the shaft used rails pulled up after the San Francisco earthquake. The picture doesn't show, but this shaft slopes down at about 40 percent. 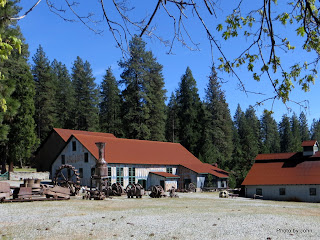 Most of the support buildings were corrugated iron. Out in the yard were rows of winches and other equipment used in the mine. 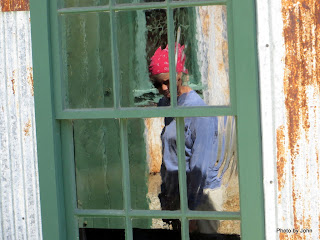 I wanted a picture of the wavy old glass. Pretty nice reflection, too. 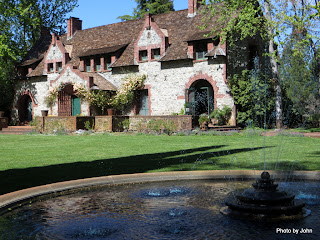 The mine owners built an English manor style "cottage" (their words, not mine) on the mine property using the same waste rock & clay brick materials. Cost was $25K for the house in 1897 plus $10K for the landscaping. 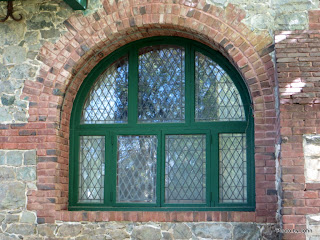 Loved the arches and the leaded windows. 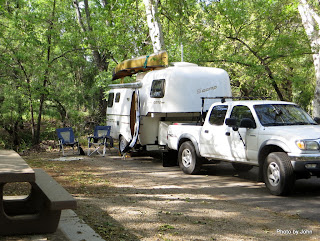 Today was another up and down day including one section of narrow, winding, 13 percent descent. I was thankful for the ScanGauge and extra transmission cooler!

We're settled in for the evening and enjoyed the long hot showers. We'll dump in the morning before getting in another small dose of freeway miles. Five bars of Verizon 4G with the antenna & amplifier.
Posted by Just Finding Our Way at 8:07 PM