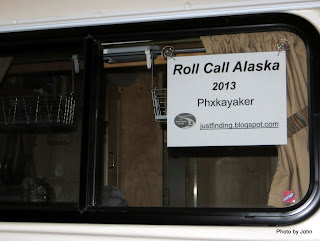 As every year, there are a lot of RVers headed to Alaska this summer. There are at least 75 on RV.net's Alaska 2013 forum thread, most running much larger units than ours. They're all traveling on independent schedules so a sign in the window is about the only way to recognize them. It will be interesting to see if we ever run across one of them.

There are two or three main routes north depending on where you start. Of course, just like we prefer to avoid freeways whenever possible, we expect to take the road less traveled on portions of this trip as well. Northbound is blue on the map, southbound is yellow. As you can see from the map, we've left ourselves open to lots of options for the two+ months we'll actually be in Alaska.

It is all subject to change at the drop of a hat, but we're intending to wander up California's Highway 49 through the gold country, then up a portion of the Northern California and Oregon coast before enjoying time with other fiberglass trailer fans at the Northern Oregon Gathering followed by family and friends in the Northwest. We're expecting to cross the border at Osoyoos, BC around the middle of May and then wander towards Jasper and Grande Prairie, Alberta before heading to Dawson Creek, BC and the famous Milepost 0 of the Alaska Highway. We're thinking we'll target around 200 miles a day, but interesting (or boring) places could change that.

Once we cross the border northbound, we do have two reservations - one in Denali the second week of July, and one for the ferry from Haines to Skagway on the 9th of August. Other than that, we'll take our chances. This is going to be fun!
Posted by Just Finding Our Way at 8:00 AM