What Happened to Costa Maya?

Maybe it was lost like the Mayan civilization. We’d hoped to visit some Mayan ruins, but the weather said otherwise. The Captain told us we couldn't dock because of high swells that are forecast to get worse, washing over the top of the dock. Instead, we headed on to Cozumel where we’d be docked for nearly 20 hours instead of the scheduled 10 or 12, giving us a chance to go to dinner as a family at Casa Denis. 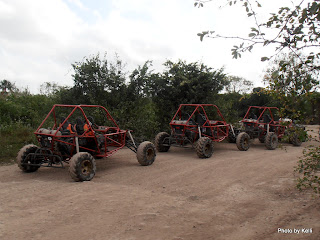 While the son & daughter-in-law went diving, we enjoyed a shore excursion that was prefaced by questions about our tolerance for dust, mud, wet, rough, and noisy. Right down our alley! WildTours in Cozumel does several tours for the cruise trade. We selected Jade Caverns by XRail. 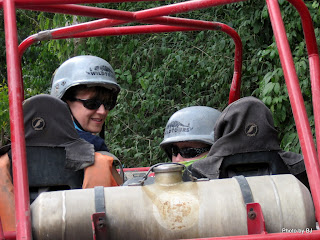 The XRails are two person rigs and you must be 18 to drive. Kelli teamed up with Spencer while BJ rode with me. She was going to drive on the way back but decided it was too dusty for her contacts. Goggles were available and we would have been wise to take advantage of them! 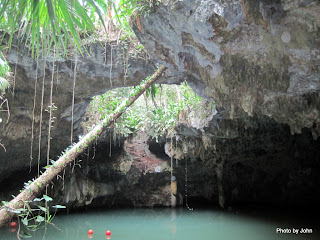 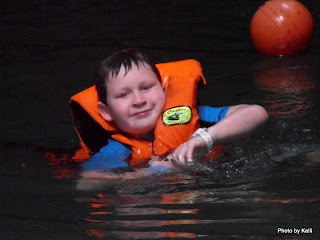 Many elected to go swimming. 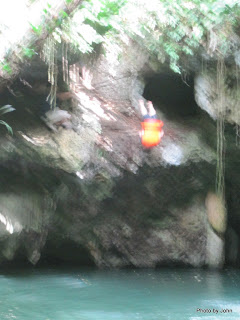 Spencer, and others, decided that swimming wasn’t enough so they took advantage of a trail that led to a spot where they could jump into the pool. It’s a fuzzy picture, but Spencer decided a forward somersault was in order. The video shot by the WildTours staff was much better. 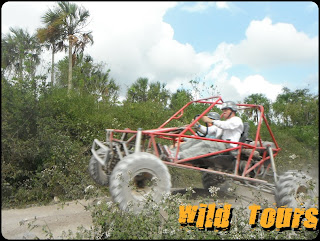 The road back included jumps (note the white shirt) 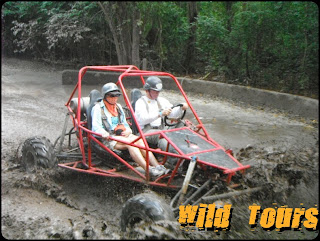 and a damp spot in the road (this picture was outbound when everyone went through the hole slow - not so much on the way back!) 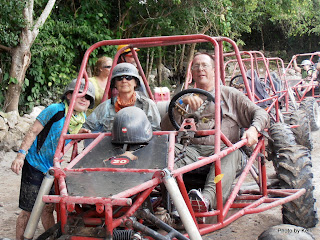 that resulted in the dirty, muddy, wet as advertised. (Note the color of the shirt now)

Spencer decided the excursion wasn’t good – it was awesome! We all enjoyed it and were very impressed with the staff of WildTours. Lots of fun!
Posted by Just Finding Our Way at 5:00 PM