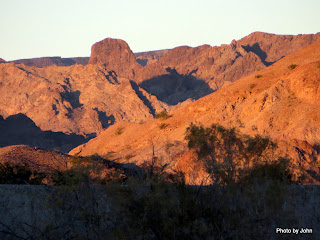 Day 2 is a shorter day just because of where legal camp spots are located. With just 7.5 miles, the sun was higher on the hills when we got out of bed for the final time.

In spite of dutch ovens full of cinnamon rolls, I stuck to my planned breakfast meal with minimal mooching. 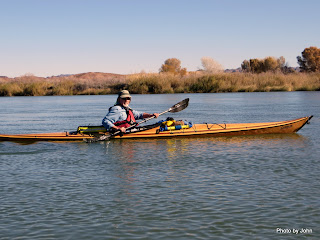 We got to paddle with Dr. Z and his beautiful handmade hybrid Cirrus today. 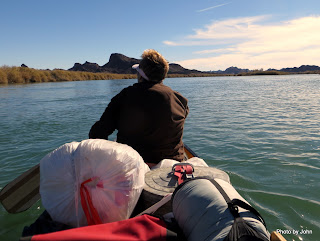 The open boats were starting to look like garbage scows today with all the trash from the "banquet" last night. The back country sites, although they do have four wheel drive access, don't have garbage service but our destination for today does! 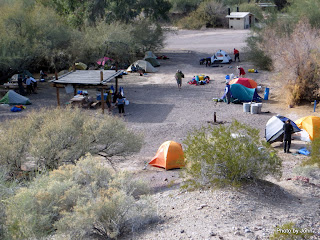 Camp for the evening was one of the group sites at the main part of Picacho State Recreation Area. I never was able to get a picture with all of the tents visible!

Picacho was originally a small mining town and some remains are still accessible via a short hike. It also sports solar hot water for showers in the campground for those who want to be pampered.


The park is accessed via an 18 mile gravel road which serves to limit the impact on the hot water system.

I made what I declared to be Shepard's Pie although there was some discussion regarding the liklihood of said shepards recognizing it. It was declared good and really good and I didn't get a picture of it so I'll declare it good enough. Meanwhile, there was another group making clay-baked salmon while most enjoyed turkey soup and/or chili. And you thought this was a wilderness starvation trip!
Posted by Just Finding Our Way at 5:00 PM