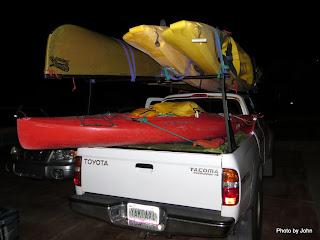 Generally, I love to hit the road and see what is around the next corner, but sometimes the drive gets in the way of other priorities. With four boats and gear for five people for six days on the river, and just a week off of work, the 540 mile drive to the launch is sometime to get out of the way as quickly as possible. The 6 am departure on day one was part of the plan.  The load looked like Jed Clampett helped, but at least it's secure. 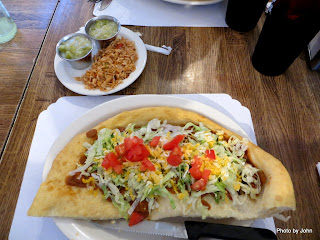 A stop for fuel and the anticipated Navajo taco in Kayenta.  We've done this trip enough that we're starting to develop traditions.  The 1/2 serving is a smart addition to this developing tradition! 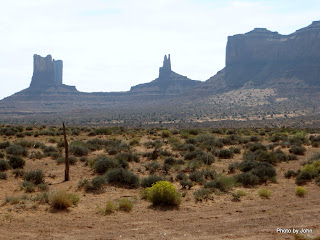 A quick stop at the north end of Monument Valley to marvel at the landscape before continuing on. It was smoky so the picture isn't spectacular, but the landscape is!  Someday we'll come back and spend time in the area instead of just passing through. 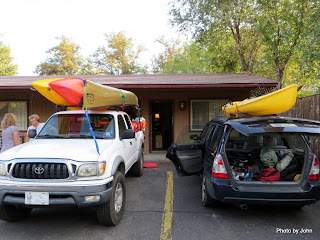 Ten hours later, we arrive in Moab, Utah for an overnight and a chance to catch up with the other members of our motley crew. The rustic facilities have become part of the experience - hot showers and a low traffic parking lot gives space for last chance sorting of gear.

We'll post the the remainder of the trip next weekend when we get off the river.
Posted by Just Finding Our Way at 8:13 PM