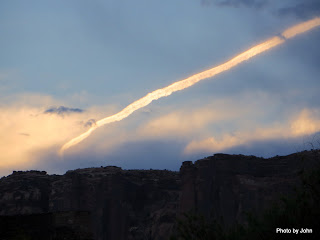 Monday, September 24 -- We had a couple short rain showers during the night, so we dawdled a bit before packing up the tents, hoping that they would dry. Skies were cloudy but we were blessed with a contrail that was picking up the sun and created a bright ribbon across the sky. 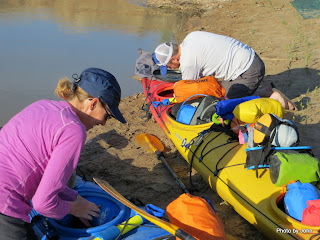 Ian and Shari were paddling their sea kayaks and had the most work fitting their gear back in the boats. The trade-off was that they had the fastest boats and likely required the least water depth. 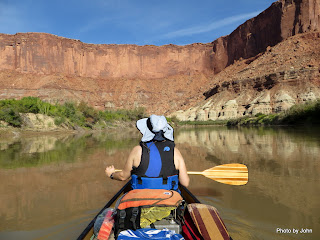 Love the red cliffs! These are on the west side of Fort Bottom. 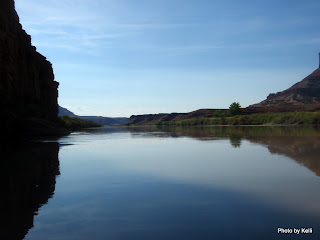 We were blessed with calm for part of the day, resulting in deceptive but beautiful reflections. The river is very muddy and while it may look deep in this picture at the upper end of Potato Bottom, most of it isn't! 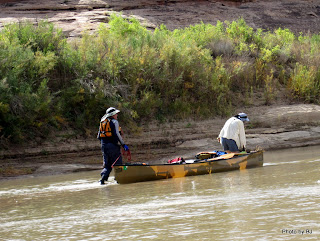 A couple miles later, Kelli and I got to prove that it wasn't very deep! We did this several times through the trip, but we're proud to say that while we weren't the first to run aground, we did walk more than anyone else on the trip. The groover was heavy, you know! 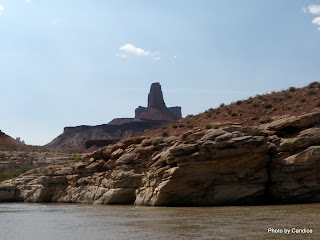 The excitement for the day was the small wave train at Millard Canyon. When the river is low there's a narrow channel with waves big enough to splash some water on most of the paddlers. When it is high, you don't really see  the feature. We stopped immediately below on a nice sandbar for lunch and to debate the impact of the growing wind. Nice view of the Buttes of the Cross from this angle. 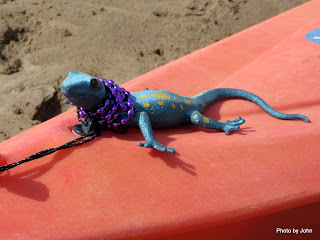 BJ added a decoration to her boat during lunch. I forgot Squeak, the mascot from multiple previous trips, who remained sitting on my desk at the office. :-( 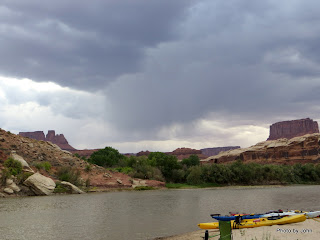 We hoped to stay at Anderson Bottom or Bonita Bend, but a raft trip was already at Anderson
Bottom and the Bonita Bend approach was very muddy. We stayed on a sandbar immediately downstream from Bonita Bend on Unknown Bottom, and got the tents set up while the wind started to blow. 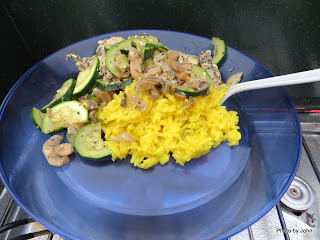 We sure didn't suffer on this trip - saffron rice with chicken, onion, mushroom, and zucchini was featured in one kitchen, with equally good food coming from the other kitchens.  As the week went on, food clearly took a starring role.

Posted by Just Finding Our Way at 4:42 PM