Perhaps the most important feature that led to our selection of the Scamp 19 Deluxe was the privacy of the loft created by the "front" bathroom. One of the downsides of this layout is reduced circulation when using the air conditioner. A number of people have installed muffin fans pulling air through a duct installed in the storage space over the bathroom. In fact, I collected some of the parts to do just that but then realized the amount of storage that was going to get blocked off. 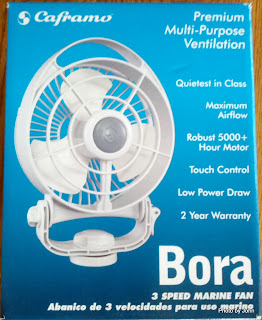 About the time I was ready to start cutting, Caframo marine fans were mentioned on the Casita forum.  A little research led to a highly adjustable fan with very low power requirements - 4 watts on the high speed setting.  Size, adaptability, ease of mounting, and low power were all pluses.  Pricing was not a plus but that's what you get when you're shopping in the marine world.

With the ability to fold out of the way, we decided to mount it as close to the roof as possible at the top of the stairs to the loft. 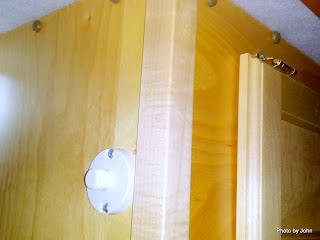 The mount is a threaded flange that comes with two wood screws for installation.  I substituted a pair of #8 machine screws with flat washers and nyloc nuts in my installation. 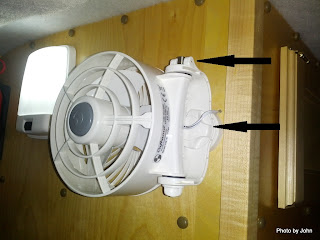 The nut that holds the fan to the threaded flange allows for rotation if desired.  The cam lever at the top (at least in our installation) allows the fan housing to be rotated up to 180 degrees and then latched in place.  The fan will be stowed against the wall when not in use.  The grey button is the on/off/speed switch. 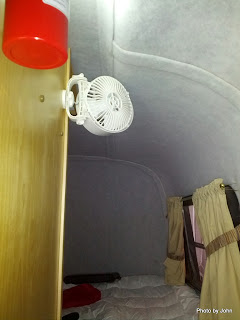 Even when the fan is deployed we have adequate head clearance.  Power was tapped from the feed to the light. Given the previous conversion to LED, even with the fan at high speed we'll only draw 1/3 of the draw of the incandescent lamp that was originally installed.

The fan puts out LOTS of air. I'm pretty sure that we'll only use it on the lowest setting. Even at that, we've significantly improved circulation.
Posted by Just Finding Our Way at 8:24 PM